The Supermarine Swift was designed and produced by Supermarine as a British single-seat fighter aircraft powered by a turbojet during the 1940s and 1950s. Intended for the Royal Air Force, it was introduced in 1954 and was retired in 1967. The prototype first flew in December 1948, and a total of 197 aircraft were built. 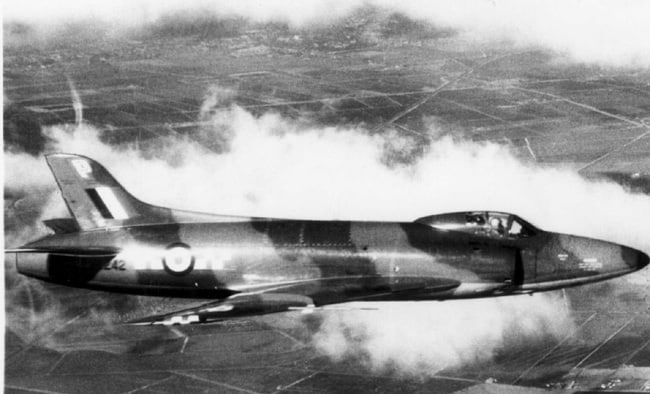 The Supermarine Swift was developed from the single-seat Supermarine Attacker naval jet fighter. The main difference between the Swift from its predecessor was its swept wings. On December 29, 1948, the first prototype designated as Type 510 took to the air for the first time. It was the first British aircraft that flew with swept wings and swept horizontal stabilizer. The prototype also held the reputation as the first swept-wing aircraft that performed takeoff and landing on an aircraft carrier for the Fleet Air Arm. The Type 517 prototype was equipped with a variable incidence tailplane while Type 535 had a nosewheel undercarriage.

The Swift FR Mk.5 is a single-seat tactical-reconnaissance version designed with a long nose to carry three cameras and featured a frameless cockpit canopy. It is a single-seat aircraft with an external length of 12.88 meters, an external height of 3 meters, and a fuselage diameter of 1.8 meters. It has a tail height of 4.11 meters and a wheelbase of 4.54 meters. The wingspan is 9.86 meters and the wing area is 30.44 square meters. It has an empty weight of 6,094 kg, a gross weight of 9,831 kg, and an internal fuel capacity of 934 US gal with a 260 US gal belly drop tank.

The aircraft is powered by a single Rolls-Royce Avon RA.7R (Avon 114) engine. It was the first axial flow jet engine of the company. It has a fifteen-stage axial-flow compressor, cannular combustors, and a two-stage axial flow turbine. It produces a maximum dry thrust of 7,175 lbf and an afterburning thrust of 9,450 lbf.

The Supermarine Swift has a maximum speed of 620 knots at sea level and a travel range of 548 nautical miles. It can fly up to 45,800 feet and can climb at a rate of 14,660 feet per minute. It was equipped with armaments such as two 30 mm ADEN cannons, and provisions for rockets and bombs.