The Supermarine Attacker was developed and produced by the British manufacturer Supermarine as a single-seat naval fighter powered by a turbojet intended for the Fleet Air Arm of the Royal Navy. It first flew in July 1946 and was introduced in August 1951, and has the reputation of being the first jet fighter to enter operational service with the Federal Aviation Administration. A total number of 182 aircraft plus three prototypes were built. 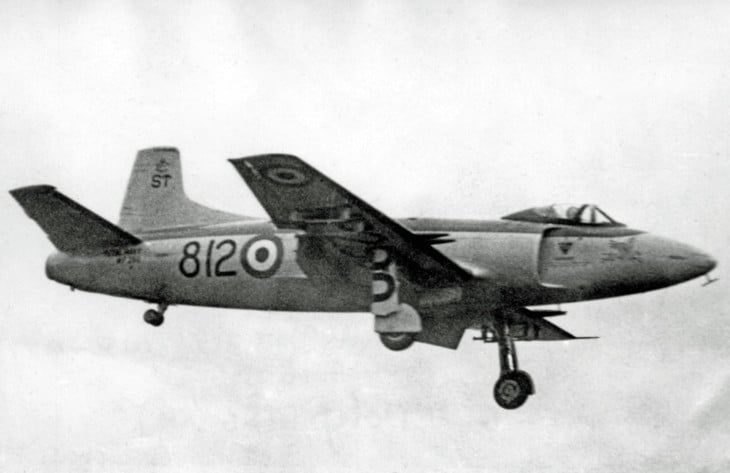 On August 30, 1944, an order for three Supermarine prototypes was placed. The second and third prototypes were specified to become navalised aircraft. On July 7, 1945, twenty-four more production aircraft were ordered; six were intended for the Royal Air force and eighteen for the Fleet Air Arm.

On July 27, 1946, the aircraft prototype designated as Type 392 with the serial number TS409 took to the air for the first time. It was a land-based type operated by test pilot Jeffrey Quill. On July 17, 1947, the Type 398 prototype first flew, and on January 24, 1950, the Type 513 prototype performed its maiden flight. On April 4, 1950, the first production version designated as Attacker F.1 conducted its first flight.

The aircraft is powered by a single Rolls-Royce Nene engine. It is a centrifugal compressor turbojet with a single-stage centrifugal with double-sliced impeller, nine can combustion chambers, a single-stage axial turbine, and a pressure feed dry-sump with scavenging, cooling and filtration oil system. The engine produces a maximum takeoff thrust of 5,000 lbf at 12,300 rpm at sea level. The Attacker has a maximum speed of 512 knots and a travel range of 510 nautical miles. It can fly up to 45,000 feet and can climb at a rate of 6,350 feet per minute. It could be armed with four Hispano No. 3 Mark 5 20 mm autocannons.