The Chengdu J-7 is a Chinese license-built version of the Russian supersonic jet Mikoyan-Gurevich MiG-21. The aircraft was produced from 1965 to 2013 and remains in service mostly as an interceptor aircraft in various air forces, which includes the People’s Liberation Army Air Force. 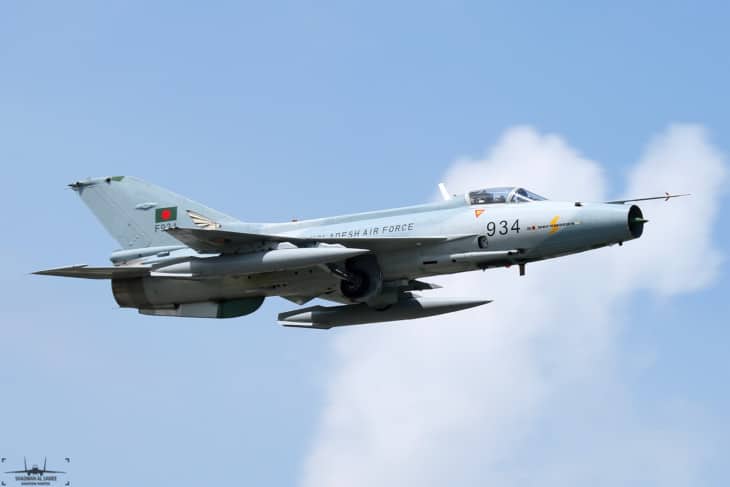 The Chengdu J-7 is a single-engine, lightweight fighter jet produced by Chengdu Aircraft Corporation and derived on its antecedent, the Soviet Mikoyan-Gurevich MiG-21. The export variant of the aircraft is labeled as F-7. The aircraft was primarily built to target the needs of the People’s Liberation Army Air Force (PLAAF). From 1993 to 2013, over 2,400 Chengdu J7s were produced. In May 2013, aircraft production ended.

The manufacturing company developed fifty-four versions of the J-7 in order to be suitable for the PLAAF. Two of the J-7 versions were built by the CAC, which included an indigenous Chinese version and an export version. Around twenty-eight domestic versions and twenty-six export versions are in service around the world.

The Chengdu J-7 was an all-weather interceptor built to conduct ground attack missions. The delta wings allow the aircraft to climb to higher altitudes and fly at supersonic speeds. It is designed with a small airframe and robust engines and it is solely good enough for point-defense because of its smaller range capabilities.

The avionics system incorporates a HUDWAC (head-up display and weapon aiming computer) supplied by GEC-Marconi and global positioning system by Garmin and a navigation and bombing system. It also features a multi-mode pulse-Doppler Super Skyranger radar that provides a full look-down/shoot-down capabilities and offers target range, range rate, and line-of-sight data to the avionics system.

The aircraft is armed with 2×30 mm Type 30-1 cannons (60 rounds per gun). It has five hardpoints in total, four below the wing, and one below the centerline fuselage. It is also equipped with a 55mm rocket pod (12 rounds) and a 90mm rocket pod (7 rounds). The aircraft is fitted with various air-to-air missiles and 50kg to 500kg of unguided bombs.