The Chengdu JJ-5 is a two-seat trainer variant of the Mig-17 developed by the Chinese company Chengdu Aircraft Industry Corporation. In May 1966, it performed its maiden flight. The aircraft was a combination of MiG-15UTI’s (JJ-2) cockpit, Shenyang J-5‘s engine, and J-5A’s fuselage. It entered service with the People’s Liberation Army Air Force in November 1967 and ceased production in 1986. A total number of 1,061 JJ-5s were built and has been exported to different countries. 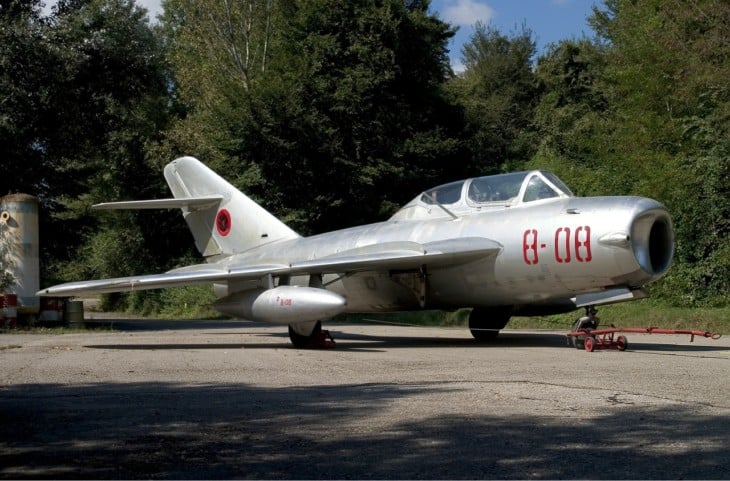 During the late 1960s, the Chengdu Aircraft Industry Corporation developed a two-seat trainer variant based on the MiG-17. The aircraft was designated as Chengdu JJ-5 and incorporated the two-seat cockpit of the MiG-15UTI dual-control jet trainer, as well as the J-5’s engine, and the J-5A’s fuselage. The internal armament was removed and replaced by a single Nudelman-Richter NR-23 23 mm autocannon in a ventral pack. On May 8, 1966, the aircraft took to the air for the first time. At the end of 1966, the aircraft received its certificate from the State Certification Group. In November 1967, it entered service with the People’s Liberation Army Air Force. In 1986, aircraft production ended. A total number of 1,061 JJ-5s were built and were exported to different countries.

The aircraft is powered by a single WP-5D non-afterburning turbojet engine. It produces a maximum takeoff thrust of 5,010 lbf. It has a centrifugal compressor, nine can combustion chambers, and a single-stage axial turbine. The JJ-5 has a maximum speed of 566 knots at 16,000 feet. It has a travel range of 660 nautical miles at 33,000 feet. It can fly up to 46,900 feet and can climb at a rate of 5,300 feet per minute. The takeoff and landing distances are 590 meters and 825 meters, respectively.