The Xian Y20 is the first Chinese made heavy military transport equipped of flying long distances with a range of 2,400 nautical miles with maximum payload. It is the largest domestic strategic airlifter for the People’s Liberation Army Air Force (PLAAF). 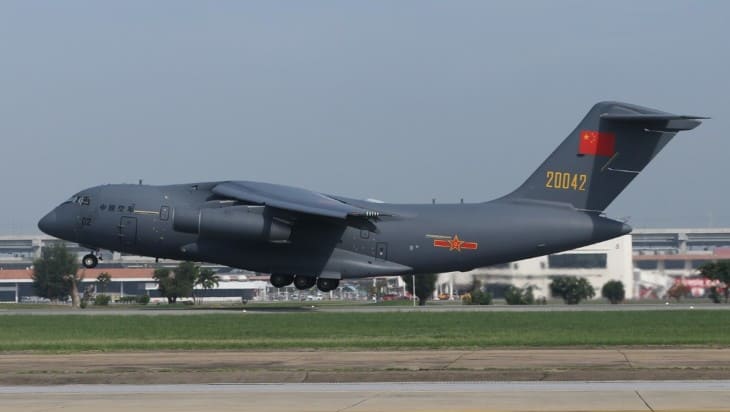 Xian Aircraft Industrial Corporation developed an aircraft similar in size to the Ilyushin IL-76 and a bit smaller than the Boeing C-17. In 2006, this project was officially launched. It is part of an initiative to produce a heavy transport aircraft under China’s Medium and Long Term National Science and Technology Development Program.

The Xian Y-20, also known with the official codename Kunpeng, was named after a giant bird in Chinese mythology that can fly thousands of miles. The aircraft is also known as the Chubby Girl due to its broad fuselage design. The Y-20 was developed for deployment in the transportation of personal as well as heavy equipment during military missions, humanitarian aid and peacekeeping operations. It can be utilized for Airborne Early Warning and Control (AEWC) and also for aerial refueling.

The Y-20 is the first cargo transport that utilizes the 3D printing technology in order to expedite the aircraft development and decrease the manufacturing cost. It is also the third aircraft that used the Model-based Definition (MBD), the practice of utilizing 3D modeling within 3D computer aided design software to supply specifications for individual components and product assemblies. In October 2009, a team that will perform the model-based definition was officially formed. The MBD application was extended to the whole aircraft and became compulsory for all the Y-20 contractors and subcontractors. Application of the MBD immensely decreased the required installation time of some aircraft parts making it forty percent less in design work, seventy-five percent less in production preparation, and thirty percent less in manufacturing cycle.

In December 2012, ground testing of the aircraft was started.

On January 26 2013, the China’s first domestically developed heavy air freighter made its first flight at Shaanxi Yanliang Aviation Base. As per the Ministry of National Defense, “the successful maiden flight of the Y-20 is important in promoting China’s economic and national defense buildup, as well as improving its emergency response and humanitarian aid abilities”.

On February 6 2016, the fifth prototype with aircraft registration 788 made its first flight.

In June 2016, two of the first Xian Y-20 have been delivered to the People’s Liberation Army Air Force (PLAAF). The PLAAF requires four hundred Y-20 that will start to be delivered in 2017. In July 2016, the aircraft entered into service.

The strategic airlifter is made of composite material components that are produced in China. The triple slotted trailing edge flaps were developed by the Ukrainian Antonov Design Bureau.

This heavy military transport has a wide and deep fuselage specifically designed for the cargo section. It has an external length of 47 meters and an external height of 7.2 meters. It has a T-tail empennage configuration with high-mounted horizontal surfaces on the vertical stabilizer. The tail height is 15 meters.

The slightly swept back high-wings of the Y-20 has a wingspan of 45 meters and a wing area of 330 square meters with engines mounted under each wing.

The Xian Y-20 also features a glass cockpit that can accommodate three crew members, with two pilots and a loadmaster. It has a rear cargo loading assembly designed for rolling stock and loading and unloading of sizeable cargo and equipment.

The aircraft is fitted with heavy duty retractable landing gear comprising of three rows, with two wheels on each row, amounting to a total of six wheels. The landing gear is capable to take off and land on rugged and unpaved runways. The nose gear capable of being steered has a standard twin-leg unit designed for runway taxing.

The Y-20 is powered by four Soloviev D-30 bypass turbofan engines. Each engine produces a maximum thrust of 26,460 lbf. All early production aircraft were fitted with this engine; however, it has been planned to be replaced by Shenyang WS-20 with a thrust range of 26,000-31,000 lbf.