Xian Aircraft Industrial Corporation under the Aviation Industry Corporation of China is currently developing a twin engine turboprop airliner capable of flying up to 810 nautical miles and has a maximum speed of 344 knots. The Xian MA700 targets short and medium range regional passenger flights and expected to enter service in 2022. 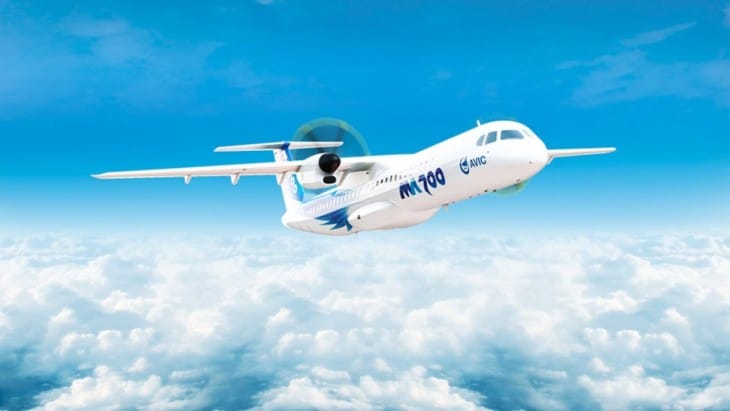 In 2007, the Xian MA700 was first announced as a seventy-seater aircraft. But in 2008, it has been publicized as an aircraft capable of having around 80 seats in a four abreast layout.

Xian Aircraft under the state-owned parent company Aviation Industry Corporation of China (AVIC) is presently developing the regional aircraft MA700. In 2013, supplier selection for the major parts of the aircraft had started.

In 2014, the company signed a Letter of Intent (LOI) with Safran Electrical and Power to supply the main and auxiliary power generation system of the aircraft.

In December 2017, manufacturing of flaps in Xian and cargo door structures in Shenyang had started. On the same month, the British company Dowty Propellers was chosen for a R408 propeller derivative. In May 2018, fuselage sections and wingboxes has been sent for construction. In June 2018, structural design of the aircraft was completed while twenty-five to twenty-six critical design reviews were accomplished. In July 2019, avionics test was performed. In October 2019, the company attached wings on the fuselage of an experimental aircraft intended for static testing on the ground.

The first planned flight should be in November 2019 however it has been postponed. The maiden flight was rescheduled in 2020 and anticipated to receive the Civil Aviation Administration of China (CAAC) certificate by 2021. AVIC also targets to apply for the Federal Aviation Administration (FAA) and the European Aviation Safety Agency (EASA) certification so the aircraft can expand its range in the Western market.

The MA700 has conventional straight, tapered wings attached on the mid part of the fuselage with a wingspan of 27.9 meters. The aircraft has an external length of 30.5 meters, height of 8.2 meters and fuselage diameter of 3 meters. The aircraft’s fuselage can be lengthened or shortened while keeping the base layout of the cabin and cockpit. It has a T-tail empennage and a tricycle type landing gear wherein the main landing gear is being carried on faired pods on the outward part of the pressure vessel.

The aircraft features modernized aerodynamic technology and a fuel-saving propulsion system that is made perfect for operations in high altitudes and high temperatures. As per the chief designer of the aircraft, Dong Jianhong, “the airliner also features good adaptability for airports with poor conditions and is able to take off and land on short runways.” It also boasts the benefits of reduced fuel consumption and maintenance cost.

The cockpit of the MA700 can house two crew members; the pilot and the co-pilot. It features a cockpit control system supplied by Safran and a fly-by-wire system by Parker Aerospace that offers better maneuverability and relaxed stability while in flight.

The aircraft can accommodate up to seventy-eight passengers in a standard configuration and eighty-six passengers in a high density layout. The spacious and cozy seating layout can be accessed using wide door stairs that supports easy boarding and deplaning of passengers.

The Xian MA700 is powered by two Pratt and Whitney Canada PW150C. These turboprop engines can produce an output range of 5,000 shaft horsepower each. It has a length of 2.42 meters and a diameter of 790 millimeters. The engine uses a three stage axial low pressure compressor driven by a single stage low pressure turbine. Power is supplied to the offset propeller reduction gearbox through a third shaft that is attached to a two stage free turbine.