The Xian MA60 is a twin-engine turboprop-powered airliner built by Xian Aircraft Industrial Corporation under the Aviation Industry Corporation of China (AVIC). The MA60 is derived from the Xian Y7-200A which operates in rugged conditions with limited ground support and features short take-off and landing capability. 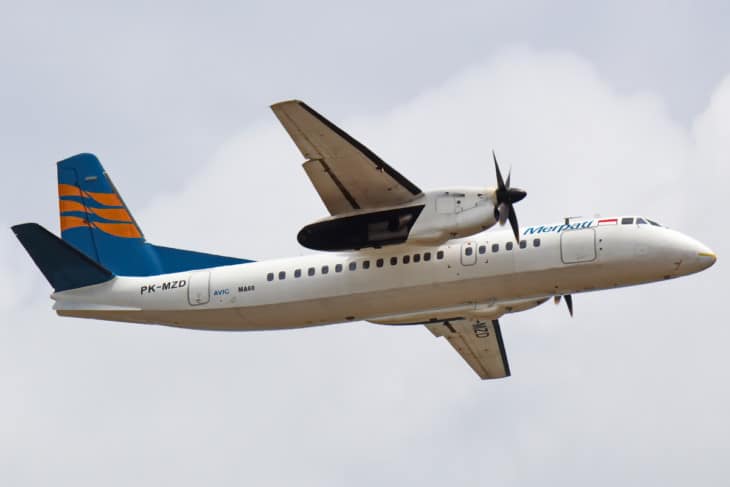 In February 2000, the Xian MA60 took to the skies for the first time. In June 2000, the aircraft was awarded its type certificate by the Civil Aviation Administration of China. The MA60 did not apply for Federal Aviation Administration (FAA) and European Aviation Safety Agency type certification, as well as it is not certified to be used in the European Union or in the United States.  In August 2000, it entered service with Sichuan Airlines. In 2006, the aircraft was accredited with the Indonesian Air Transport Directorate General (IATDG) type certification. By October 2006, a total of ninety MA60 orders were received by the manufacturing company. Towards the end of 2006, twenty-three aircraft were delivered.

There were five variants of the MA60 including the MA60-100 with less weight and improved performance, the MA60-MPA Fearless Albatross maritime patrol and ASW version offered for sale at Airshow China in 2002, the reduced capacity 40-seat version designated as the MA40 which was offered for sale also in 2002, the MA60H-500 military cargo variant with rear cargo ramp, and the MA600, a more improved version of the MA60.

The MA60 was built for passenger and freight transport, maritime patrols, medevac, and paratroop dropping missions. It features a de-icing system that allows the aircraft to fly and operate under complicated icing conditions. It was equipped to take-off and land on rough airstrips, grass, and sandstone runways. It is also equipped with an air-conditioning system to modulate the cabin airflow and sustain a soothing temperature. The aircraft has an external length of 24.7 meters, a height of 8.86 meters, and a diameter of 2.9 meters. It has a wheelbase of 9.7 meters, a wingspan of 29.2 meters, and a wing area of 75 square meters. The MA60 can accommodate up to sixty-four passengers and two crew members.

The aircraft is powered by two Pratt & Whitney Canada PW127J turboprop engines with a maximum thrust of 2,750 horsepower each.