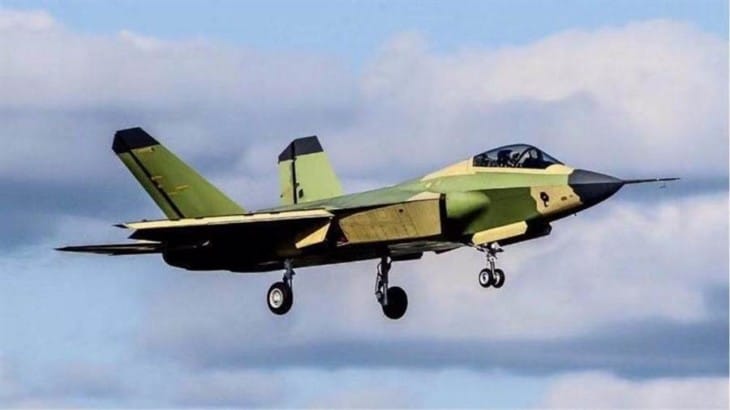 In September 2011, an image of the Shenyang F-60 model was posted online. In June 2012, images and short clips of video began to pop online about an airframe of an overwrapped fighter aircraft that has been assumed as the Shenyang F-60 prototype and was transported on a highway road, obtaining the nickname “Zongzi aircraft”, however others assumed that the aircraft is an L-15 Falcon.

In November 2012, an aircraft model was displayed at the China International Aviation and Aerospace Exhibition in Zhuhai, Guangdong. After two years, in November 2014, the prototype performed a test flight in Zhuhai Air Show.

Initial operational capability of the aircraft is anticipated this 2020.

The tubular fuselage of the aircraft has a length of 16.9 meters, width of 11.5 meters and height of 4.8 meters. It has a faceted design with clean lines, apparently for radar reflection uses. The slightly swept wings have a wingspan of 11.5 meters and a wing area of 40 square meters. The horizontal stabilizers were equipped in providing enhanced agility while the vertical stabilizers were canted outward. The tricycle undercarriage is composed of two single-wheeled main landing gear and twin-wheeled nose landing gear that has been assumed to be used as a carrier capable aircraft.

The aircraft is designed with two internal bomb bays that can fit two medium-range missiles each, together with two heavy weapon station and one light weapon station on each wing.

As per the officials of the Aviation Industry Corporation of China (AVIC), additive manufacturing was broadly used on the aircraft, that developed into fifty percent components reduction. But the airframe’s finish product can no longer be deconstructed and the static test frame needed to be transported in whole as an end result.

The single-seated cockpit of the Shenyang FC-31 is confined by a two-piece transparent canopy to enhance the pilot’s visibility during flight.

The stealth fighter aircraft can be outfitted with modernized avionics system, with single reconfigurable large multifunctional display (MFD) that displays information such as navigational route, moving map and a weather radar; a wide Head Up Display (HUD); a Ground Proximity Warning System (GPWS); Traffic Collision Avoidance System (TCAS), and airport information. It is also equipped with a Helmet Mounted Display (HMD) to project information to the pilot’s eyes; an Electro Optical Targeting System (EOTS) for detection of targets during aerial warfare; an Attitude Director Indicator (ADI) that provides the primary indication for the aircraft’s attitude with the use of horizon bar, bank pointer, pitch reference scale and the attitude display; and an advanced sensor technology.

Two RD-93 turbofan engines manufactured by JSC Klimov supply power to the Shenyang FC-31. Each engine provides an afterburning thrust of 19,000 lbf. However, after some time, Shenyang Aircraft Corporation replaced the RD-93 turbofans with new stealthy engines WS-13 from Guizhou Aircraft Industry Corporation. WS-13 has a length of 4.14 meters and diameter of 1.02 meters. The brand new after burning turbofan engines can provide about 22,400 to 24,400 pounds of afterburning thrust that will allow the aircraft to sustain a supersonic flight.