The Shenyang J-5 is a Chinese-built single-seat jet-powered interceptor and fighter aircraft based on the Soviet Mikoyan-Gurevich MiG-17. The Shenyang J-5 was exported as the F-5 and was initially named Dongfeng-101 and Type 56 before being named J-5 by 1964. 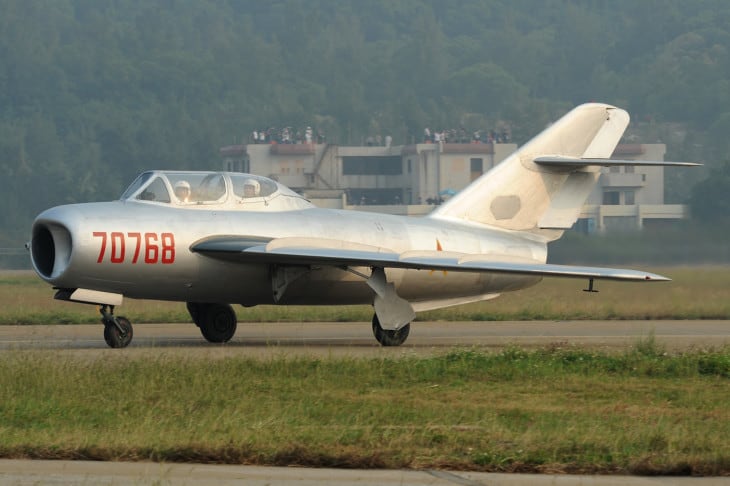 On July 19, 1956, the first Chinese-built Mig-17F, (serialized Zhong 0101) took its maiden flight piloted by Wu Keming. The aircraft produced several variants such as the Type 56, Dongfeng-101, Shenyang J-5, Shenyang J-5A, Chengdu JJ-5, and Shenyang J-5 torpedo bomber. Type 56 was the pre-service designation for the aircraft while the initial service name was Dongfeng-101.

The Shenyang J-5A was the license production of the Radar-equipped MiG-17PF. A total of more than300 of this type were produced. This variant was still in service with the People’s Liberating Army Air Force.

The Chengdu JJ-5 was a twin-seat fighter trainer variant of the J-5. It was designed and developed by Chengdu Aircraft Corporation. The Chengdu JJ-5 was a combination of J-5 airframe, J-5A airbrakes, and the tandem twin-seat cockpit of the JJ-2 (MiG-15UTI). It has an external length of 11.5 meters. The empty weight is 4,080 kg and the gross weight is 6,125 kg. It was powered by a 5,010 lbf WP-5D non-afterburning turbojet. It has a maximum speed of 566 knots, a range of 660 nautical miles, a service ceiling of 46,900 feet, and a rate of climb of 5,300 feet per minute. Export variants were named FT-5.

The Shenyang J-5 torpedo bomber was a single aircraft carrying a single torpedo below the fuselage centerline. Central cannon was detached, as was some fuel storage capacity. Testing proved performance degradation was too great and further development was ditched.