Xian JH-7 is a twin engine fighter bomber designed in order to meet the requirements of the PLANAF and the PLAAF. This two seat supersonic bomber has a maximum range of around 490 nautical miles without refueling and has a maximum speed of 976 knots. 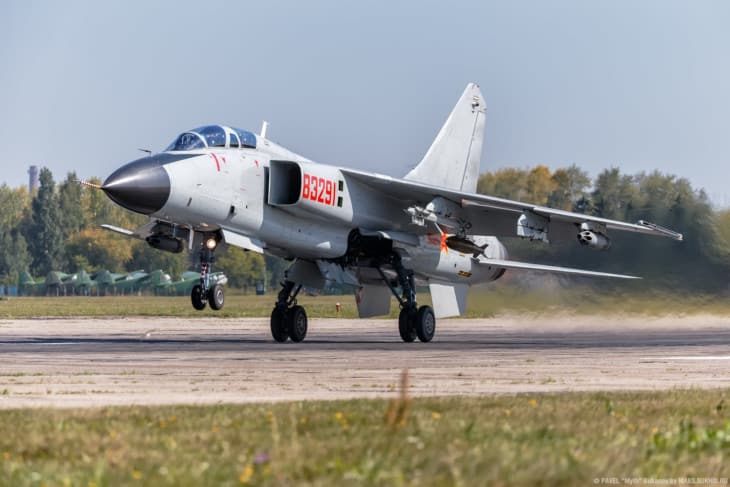 The JH-7 codenamed “Flounder” by North Atlantic Treaty Organization (NATO), also named the FBC-1 “Flying Leopard” is a traditional design developed before the rise of stealth technology. In the early 1970s, the People’s Liberation Army Air Force had a requirement for a new fighter bomber to take over the old Harbin H-5 and Nanchang Q-5. A request was formally proposed to the Ministry of Aviation Industry, now known as the Aviation Industry Corporation of China (AVIC) who arranged a developmental program when attempts for a joint venture with foreign partners did not succeed. The manufacturer Xian Aircraft Industrial Corporation started to work on a tandem two seat supersonic fighter influenced by the all-powerful F-111 Aardvark by General Dynamics.

After some time, the idea was remodeled into a fast-anti-ship fighter aircraft that came up in the name “JH”, consisting of a pilot and weapons systems officer in a tandem arrangement. The evolved aircraft JH-7 is the China’s first design that uses computer software program.

On April 19 1983, the developmental program was approved by Deng Xiaoping, the former paramount leader of the People’s Republic of China.

By 1987, there were six prototypes built. On December 14 1988, the first prototype took its maiden flight.

The Xian JH-7 has a slab-sided fuselage with an exterior length of 22.32 meters and height of 3.73 meters. The aircraft is fitted with a single tail rudder and high-mounted compound swept wings with a wingspan of 12.8 meters and a wing area of 42.2 square meters. Two turbofan engines were attached with lateral air intakes. The wheelbase is 8.7 meters.

The Xian JH-7 features a two seat tandem cockpit; the rear seat is moderately higher compared to the front seat to allow the weapon operator a better view and clear visibility. The cockpit is protected by armor plates and there is a back-hinged canopy on each seat.

The JH-7 is equipped with a Type 232H Eagle Eye multifunction PD fire-control radar while the improved JH-7A is equipped with more efficient JL-10A PD fire-control radar with good reliability and an extended detect range. The cockpit features a HK-13-03G Head Up Display (HUD), two black and white MultiFunction Displays (MFD) and one colored multifunction display. The fire control system for the YJ-8k subsonic anti-ship cruise missile is located in the seat of the weapon operator. Processing of combat data is done by the mission computer with the use of the Mil553B digital data bus.

The aircraft is armed with a 1×23 millimeter twin-barrel Gryazev-Shipunov GSh-23L automatic cannon that can fire 300 rounds each gun. It has nine total hardpoints with a capacity of 9,000 kg external fuel and ordinance; six were under wing, two were at the wing tips and one under fuselage. There were several types of missiles from air-to-air, anti-ship, air-to-surface, and anti-radiation. There were also unguided bombs, laser guided bombs such as GB1 and GB5, and satellite guided bombs like LS-6, FT-12, GB6, FT-2, FT-3 and FT-6.

The Xian JH-7 is powered by Xian WS-9 Qinling low bypass turbofan engines with a maximum thrust of 20,520 lbf with afterburner.