The Short C-23 Sherpa is a twin-engine utility transport aircraft designed and manufactured by Short Brothers, an aerospace company in Belfast, Northern Ireland. It was specifically crafted to operate from unpaved runways thus has a short runway requirement both for take-off and landing. 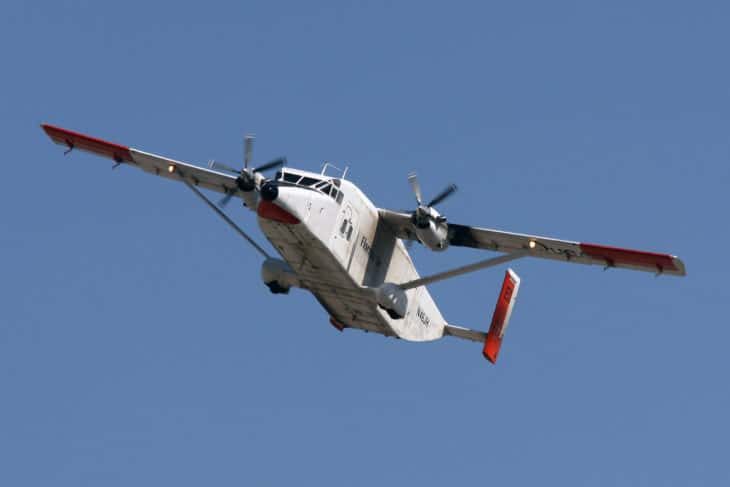 In 1981, the Short Brothers decided to make some major modification in the Short 330 passenger aircraft. The Short 330 has done a lot of work for regional airlines all over the world and the extensive modification was initiated to bring a tough, flexible, and low-cost aircraft in the market.

In 1982, the aircraft took its maiden flight.

In 1987, the aircraft from the United States Air Force Test Pilot School have retired.

The C-23 Sherpa has been used in war missions and as an aid to natural disasters. It was also greatly used as an aircraft supporting parachute-drop training missions for the fundamentals of the Army and of the special operations.

The C-23 Sherpa is a military configured version of the Short 330. The aircraft is considered the Army National Guard’s key to missions that require a capable aircraft that is faster than the usual, can fly on a higher altitude and longer range. It features a low operation cost because of its straightforward and tough construction in comparison to other aircraft in its category.

Developed from the Short SC.7 Skyvan utility transport, the C-23 Sherpa has an exterior length of 17.69 meters, height of 4.95 meters and fuselage diameter of 2.2 meters. It has a longer wingspan of 22.78 meters and a wing area of about 42 square meters. Its fuselage and wings are longer than the Skyvan but of the same fuselage cross section. The aircraft has a wheelbase of 4.26 meters.

The C-23 Sherpa is designed with wings mounted on the upper fuselage, deep slab-sided fuselage, and notably elevated empennage. It has a short retractable undercarriage letting the hold to be reachable from the back without too much difference in height.

The C-23 Sherpa can accommodate up to a maximum of 30 passengers while maintaining satisfactory short field characteristics.

The aircraft is powered by two PT6A turboprop engines supplied by Pratt and Whitney. The engines compose of two sections, a gas generator that has an accessory gearbox and a free power turbine that has a reduction gearbox. It has a maximum power of 1,198 horsepower each.

The C-23A is a twin-engine transport type used by the United States Air Force. 18 of this type were built.

The C-23B was used by the United States Army National Guard. 16 aircraft of this type were built.

The C-23B+ Super Sherpa was acquired as second hand by the United States Army and reformed by the West Virginia Air Center. 28 of this type were modified.

The C-23C is a combination of C-23B and C-23B+ with the known Avionics System Cockpit Upgrade program. 43 of this type were modified.

The C-23D is equipped with the Safety Avionics Modification program. Only four of this type were modified.