The Short SC.7 Skyvan, also known as the Flying Shoebox of the Short Brothers was designed to operate in short haul freight and skydiving. The British 19-seater twin turboprop aircraft can fly up to 602 nautical miles and has a maximum cruise speed of 150 knots. 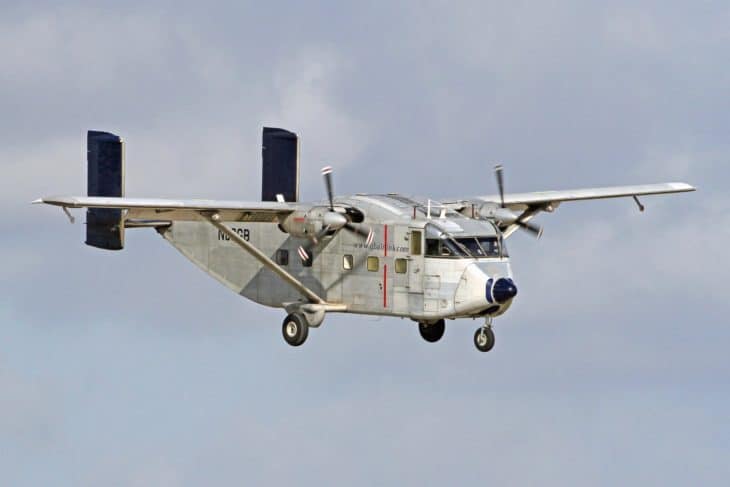 In 1958, F.G Miles Ltd was seeking backing to produce a development of design of the Hurel Dubois Miles HDM.106 Caravan that has a high aspect ratio identical with the Hurel Dubois HD.31. F.G Miles approached Short Brothers regarding the project. Short obtained the design and information from the Miles Aerovan testing. After careful evaluation on the proposal, the manufacturing company rejected the Caravan. Instead, they began to develop an original design for a utility all-metal aircraft designated as the Short SC7 Skyvan.

In 1960, construction of the SC.7 Skyvan began at Sydenham Airport.

The Short SC7 Skyvan was produced from 1963 to 1986 with a total of one hundred forty-nine units built.

The SC7 Skyvan is an all-metal aircraft that has an external length of 12.21 meters and height of 3.35 meters. Its unpressurized square section fuselage bears a resemblance to the shape of a railroad boxcar and has a width of 1.7 meters.

Its high wing has a wingspan of 19.79 meters and a wing area of 35.12 square meters. The aircraft is also designed with two vertical stabilizers and rudders. It was known with freight operators than other aircraft of its type because of the huge door at the rear part intended for loading and unloading freight. It has a wheelbase of 4.27 meters.

The SC.7 Skyvan is powered by two Garrett AiResearch TPE-331-201 single-shaft turboprop engines. Each engine delivers a maximum thrust of 715 shaft horsepower. It has a length of 1.2 meters and a diameter of 530 millimeters. It has a two-stage centrifugal compressor, reverse annular combustors and a three-stage axial turbine.

In 1977, the aircraft were utilized during the well-known abominable death flights at the depths of Dirty War in Argentina wherein approximately 4,400 detainees were hurled to their deaths on to the freezing water of Rio de la Plata.

In 1982, two Skyvans of the Argentine Naval Prefecture took part in the Falklands War. The two aircraft were transported to Port Stanley in April 1982. The first aircraft was greatly damaged by British naval gunfire that caused it to stop from flying. In June 1982, it was eventually destructed by shellfire during British bombings. The other aircraft was utilized in Pebble Island, Falkland Islands before it was destructed by a British raid on May 15 1982.

The aircraft remained in service in few numbers for air to air photography and skydiving operations. In 1970, Questor Surveys, a Canadian company that provides advanced geotechnical and engineering survey applications transformed one of the Skyvan 3s for aerial geological survey purposes.