The combination of the flexibility of a turboprop, the cabin dimension of a medium-light jet, and the exceptional performance of a light jet, the Pilatus PC-24 is a light business jet that clearly doesn’t suit into any of the present classifications of business jets. The PC-24 has been designated as the world’s first super versatile jet. 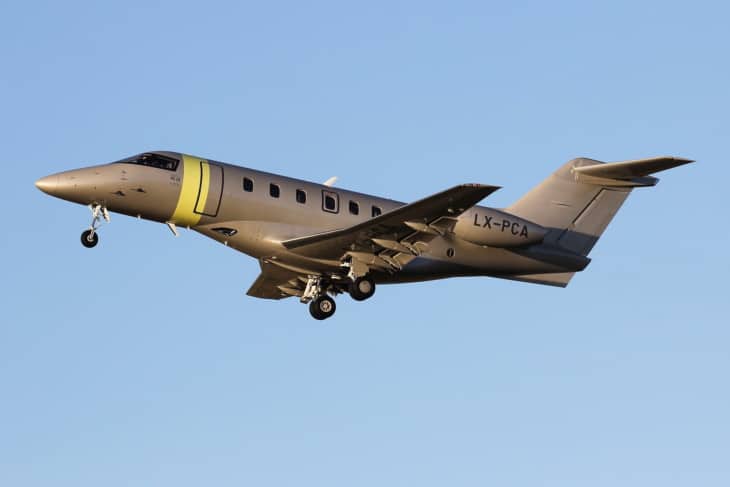 In 2007, Pilatus Aircraft, a Swiss aerospace company began the development of an aircraft that would have the overall ruggedness of the PC-12, and its ability to take-off and land on short runways with a better range and top speed.

On May 21, 2013, the PC-24 was launched at the European Business Aviation Convention and Exhibition in Geneva, Switzerland. Three prototypes were built, each one of them serving its function. The P01 is for exploring the performance envelope of the type and was rolled out on August 1, 2014, P02 is primarily for testing the integration of avionics and autopilot system, and the P03 is to be the model of production aircraft that will integrate enhancements made based on the development work completed with the other two prototypes.

On May 11, 2015, P01 took its 55-minute maiden flight from Buochs Airport, Switzerland. The event marked the beginning of test flights for the two-year certification campaign of the aircraft. On November 16, 2015, P02 conducted its first flight for a total of 82 minutes. In March 2017, P03 took its maiden flight. The three PC-24 prototypes set a record of flying 2205 hours on extreme environments including very hot temperatures, icing conditions, outside its service envelope, bird strikes, stress-strain tests, and noise tests.

On December 7, 2017, it was awarded the Federal Aviation Administration (FAA) and European Aviation Safety Agency (EASA) type certificate. In the last quarter of 2018, it received its certification to operate on dry sand and gravel. Since 2019, the Royal Flying Doctor Service of Australia (RFDS) used the PC-24 for medevac missions. On June 27, 2019, it received its certification from Transport Canada. In February 2020, the PC-24 completed its rough-field certification, including landings on grass, wet earth, and snow.

In the last quarter of 2014, Pilatus signed an agreement with FlightSafety International for pilot and technician training in Dallas, Texas. In May 2017, series production has started and in progress, as it prepares the first delivery to PlaneSense, the launch customer of PC-24. In December 2017, eight aircraft were on the assembly line and twenty-three were intended to be delivered in 2018.

The PC-24 is the first business jet of Pilatus. Oscar Schwenk, chairman of Pilatus says the aircraft “combines the versatility of a turboprop with the cabin size of a medium-light jet and the performance of a light jet”.

The aircraft is a low-wing cantilever cabin monoplane with a T-tail configuration and a retractable tricycle undercarriage. It is intended to operate from short and rough runways and outfitted with an improved wing design incorporated with a double-slotted flap to obtain the required performance. It has a wingspan of 17 meters and a wing area of 30.91 square meters. The long-stroke trailing-arm suspension landing gear flattens out rough surfaces, the main wheels have an ample amount of pressure to avoid sinking in soft surfaces. The wing flaps protect the engines from loose debris since they are made of abradable material that can be replaced easily in case of damage in the field.

The customizable cabin interiors have been designed by BMW Designworks. It has a cabin length of 7.01 meters, a width of 1.69 meters, and a height of 1.55 meters. It has a passenger door on the left, two emergency exits, and a cargo door on the rear left side. The cabin can accommodate up to eleven passengers.

All aircraft built by Pilatus are certified to be flown by just one pilot. The cockpit configuration is dynamic and innovative. It features the Advanced Cockpit Environment (ACE) by Honeywell with the Primus Epic 2 integrated avionics system that aids the pilot with enhanced situational awareness, effective management of workload, safety systems, and modern navigation tools.

The PC-24 is powered by two Williams FJ44-4A turbofan engines located on the side of the rear fuselage. Each engine produces 3,400 pounds of thrust and can fly up to 45,000 feet.