The Comac C919 is designed and manufactured by Comac, a Chinese state-owned aerospace manufacturer in Shanghai. In 2008, the development program of the single-aisle twinjet C919 was launched. In December 2011, prototype production started, and on November 2, 2015, the initial prototype was completed. It was planned to be introduced in 2021 with OTT airlines. 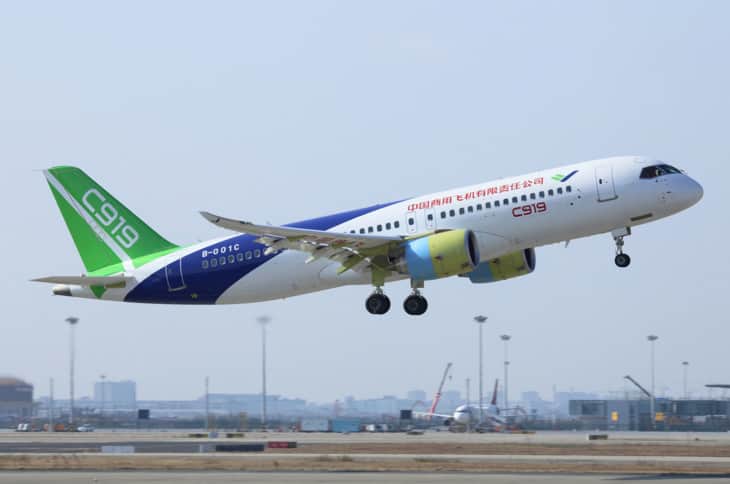 In 2008, the launch of the C919 development program aimed the aircraft to first fly in 2014. On October 28, 2010, the manufacturing company Comac sought for the aircraft to be certified by the Civil Aviation Authority of China.

During the time, Comac targetted to produce a maximum of 2,300 aircraft. In June 2011, Ryanair signed a Memorandum of Understanding with Comac to co-operate in discussions on the C919 development. On November 24, 2011, the joint definition phase was completed and announced by the manufacturing company.

It marked the completion of the initial design phase for the aircraft with evaluated detailed design completion by 2012. On November 2, 2015, the first C919 aircraft was rolled out, and on May 5, 2017, it took to the air for the first time. On July 28, 2017, the second prototype was completed and on December 17 of the same year, it took its maiden flight. On December 9, 2011, COMAC began pilot production of the aircraft. By 2020, annual production for one hundred and fifty aircraft is aimed.

The Comac C919 dimension is almost the same as the Airbus A320. It has an external length of 38.9 meters, an external height of 6.1 meters, and a fuselage diameter of 3.95 meters. The tail height is 11.95 meters. The center fuselage section is intended to be manufactured in Hongdu, China while aircraft design and assembly are being done in Shanghai. The aircraft can accommodate up to 168 passengers in a one-class configuration and 158 passengers in a two-class configuration. The Assembly of the wing section is targeted to be done in Xian, China. The supercritical wing has a wingspan of 35.8 meters with winglets.

The aircraft has a maximum takeoff weight of 72,500 kg, an empty weight of 42,100 kg, and a maximum payload of 20,400 kg. The maximum fuel tank capacity is 7,190 US gallons. The C919 is powered by twin CFM International LEAP-1C twin-spool high-bypass turbofans. Each engine produces a maximum thrust of 31,000 lbf. The standard C919 has a travel range of 2,200 nautical miles while the extended-range version is 2,999 nautical miles. The cruise speed is 450 knots.