The Comac ARJ21 Xiangfeng is developed and produced by Comac as a seventy-eight to ninety seater regional jet primarily used by Chengdu Airlines. Aircraft development started in March 2002 and production began from 2007 up to the present with a current total number of forty aircraft built. The ARJ21 Xianfeng features a 25° swept and supercritical wing as well as two General Electric CF34 engines. 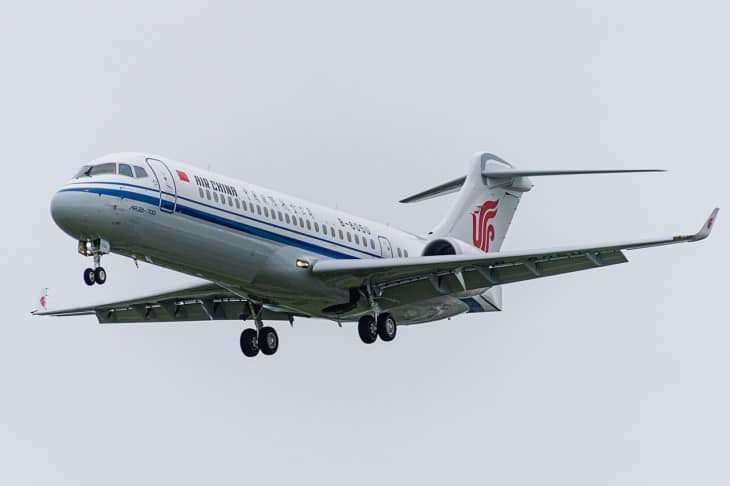 In March 2002, the development of the ARJ21 began. On December 21, 2007, the first prototype with serial number 101 was rolled out, and on November 28, 2008, it completed its maiden flight at Dachang Airfield in Shanghai. On November 29, 2015, the first ARJ21-700 was delivered to Chengdu Airlines. On June 28, 2016, the aircraft performed its first commercial flight from Chengdu to Shanghai. In July 2017, the Civil Aviation Administration of China certified COMAC to mass-produce the ARJ-21. On March 6, 2020, the first aircraft assembled in Pudong performed its initial production test flight.

The aircraft is powered by twin General Electric CF34-10A high-bypass turbofan engines. It has a single-fan three-stage LP nine-stage HP compressor driven by a four-stage LP single-stage HP turbine. Each engine is rated at 17,057 lbf thrust. The ARJ21-700 has a takeoff distance at MTOW of 1,700 meters and a landing distance of 1,600 meters. It has a maximum operating speed of 470 knots and a normal cruise speed of 447 knots. IT has a travel range of 2,000 nautical miles and a service ceiling of 39,000 feet.