The Adam A500 was developed and produced by Adam Aircraft Industries as a six-seat twin-engine civil utility aircraft. The twin-boom aircraft took to the skies for the first time on July 11, 2002, and features a push-pull configuration and two powerful Continental TSIO-550E piston engines. Production was completed with a total of seven aircraft built. 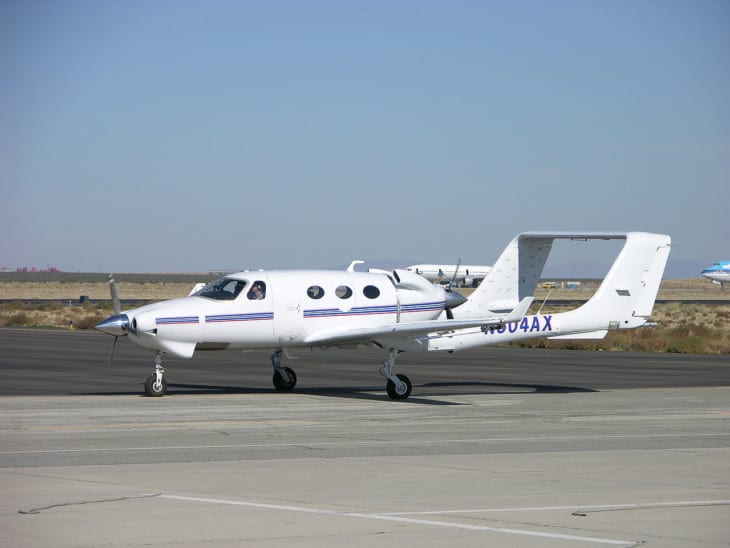 On July 1, 2002, the A500 prototype conducted its maiden flight. In May 2005, t was awarded its Federal Aviation Administration certification. In February 2008, the manufacturing company Adam Aircraft stopped operations and filed for bankruptcy. Aircraft production was completed with a total of seven A500s were produced. In 2008, Adam Aircraft was bought by AAI Acquisition Inc.

The Adam A500 was derived from the M-309 CarbonAero technology demonstrator which took its first flight in March 2000. In comparison to conventional twin-engine configuration, the centerline thrust arrangement of the aircraft lessens drag and amplifies the aircraft controllability in case one of the engines fails to function. The A500 is designed with a pressurized cabin and the airframe is mainly constructed with carbon fiber epoxy composite and a Nomex flame-resistant meta-aramid honeycomb core.

The American civil utility aircraft is operated by a single crew and can accommodate up to five passengers in flight. It has an external length of 11.43 meters, an external height of 2.3 meters, and a fuselage diameter of 1.45 meters. The wingspan is 13.41 meters, the tail height is 2.92 meters, and the wheelbase is 3.08 meters. It has an empty weight of 2,427 kg, a gross weight of 3,175 kg, and a maximum payload of 700 kg. The fuel tank capacity is 230 US gallons.

The A500 is powered by twin Teledyne Continental TSIO-550E engines. It is a fuel-injected six-cylinder air-cooled horizontally-opposed piston engine which produces a maximum takeoff thrust of 350 horsepower each. The aircraft has a maximum speed of 225 knots and a cruise speed of 220 knots. The stall speed is 75 knots in landing configuration with gear and flaps down. It has a range of 892 nautical miles at 75% power and a ferry range of 1,286 nautical miles at 45% power. The aircraft has a maximum certified service ceiling of 25,000 feet and 14,900 feet on one engine. The rate of climb is 1800 feet per minute.