Do you fancy a luxurious beach vacation in the tropics? There’s no more glamorous way to do it than to go to Hawaii in a private jet (or to fantasize about doing that if you don’t have the money for your own plane). Here are some of the best private jets that can make the trip to Hawaii in style.

The most common private planes are small sports planes that are great for indulging your love of flying or getting into the backcountry but not great for longer trips such as flying to Hawaii. Hawaii is nearly 2,000 miles away from the continent—not exactly a short trip!

To get to Hawaii on a private jet, you need one that has a long range and can make it several thousand miles without refueling. If you’re traveling from the West Coast of the United States, a super-mid jet is enough, but for a longer trip, you’ll need a heavy jet or a liner. One with a spacious cabin so that you can make the long trip in style and comfort certainly won’t hurt. (how about a private jet with a bedroom…?)

Here are the best private jets capable of making longer trips such as the flight to Hawaii. To create this list, we used criteria such as comfort, spaciousness, and flight range.

If you are a fan of smaller private planes, then the Beechcraft King Air 350ER is a great choice for your trip to Hawaii. This twin turboprop model is a mid-sized turboprop, so it’s perfect for getting to Hawaii and hopping between islands.

The King Air 350ER is the only turboprop on this list, but we felt it deserves special mention due to its ability to make the crossing to Hawaii.

While private planes of this size usually don’t have the range to make it to Hawaii, Beechcraft proved that it can make the trip in the King Air 350ER’s first-ever test flight to Hawaii in 2014. The 360ER has an even longer range than the older 350ER model.

However, a trip to Hawaii from California is pushing the Beechcraft King Air 360ER to the upper limits of its range. If you want to be safer or are traveling from an airport further away, choose a plane with a longer range. The short range and relatively bare-bones cabin are why the King Air 360ER is low on this list, even though it is a fantastic aircraft.

The Learjet 60 is another fabulous medium-range private plane perfect for hopping from California to Hawaii. It has a range of 2,405 nautical miles, giving you plenty of breathing room to make it to Hawaii from the West Coast.

The comfort of the flight is nothing to sneeze at either. This is the largest plane in Bombardier’s Learjet line with enough room to comfortably seat seven or eight people—perfect for a family getaway. The interior features a divan, comfortable seating, and screens.

The Learjet 60 is one of the best medium-range jets, but it’s not great if you are coming to Hawaii from the East Coast or another continent since you will have to stop and refuel. Its cabin doesn’t have the amenities of some of the larger jets, but it certainly is more comfortable than flying commercial.

The Cessna Citation Sovereign from Textron is maybe one of the best medium-range private jets on the market. It certainly is one of the most stylish with its sleek design, pointed nose, and distinctive stripes. Flying a Cessna is still a status symbol—for years these planes have been shorthand for luxury.

The interior of the plane is nothing to sneeze at with spacious seats in a double-club formation. It has one of the roomiest cabins that jets of this size can have, with enough space for a separate refreshments area.

All of Cessna’s Citation jets are examples of excellent aircraft as shown by this next plane in the list. Cessna’s Citation X goes above and beyond even by the standards set by the rest of the Citation line, and it is one of the best medium-range private jets you can get.

The Citation X has a superior flight range and experience. Its range is over 3,000 nautical miles, and test flights have made it as far as Greenland. It can cruise higher and fly faster than any other jet in its class, meaning that you will have one of the smoothest possible rides to Hawaii.

However, Cessna didn’t sacrifice comfort for efficiency when building this jet. The interior features luxurious pillowed seats that are roomier than any Cessna cabin. All buyers have the option to customize their cabin with interior detailing and add-ons. The newer X+ even features an executive boardroom.

Brazilian company Embraer is a relative newcomer to the private jet industry, but it is not cowed by the established names. Instead, the company is making amazing planes in all classes. Its super mid-size private jet class, the Praetor 500 and the newer 600, are the best on the market.

In terms of luxurious interiors, the Praetor 600 also stands out. The seats fold down into full berths, so you can make it to Hawaii fully refreshed; there are foldable workstations and even customizable flooring for pets.

Bombardier is another power player in the super mid-range jet field with its Challenger line, especially its newer Challenger 350 model. This model is actually the top selling private aircraft of its size, so Bombardier must be doing something right.

The superior range, at 3,200 nautical miles, and flying experience of the Bombardier Challenger 350 play a role in making this private jet so popular. The plane has special balancing technology to minimize turbulence, a common problem in private jets.

However, the design and luxury of the cabin really help the Bombardier stand out. Fly in this plane, and you can enjoy noise-reducing technology, plenty of space, and sleek design touches.

If you are coming to Hawaii from a bit further away, you want a heavy jet with the ability to cross long distances. The Bombardier Global 5000 does just that with an extensive range of 5,200 nautical miles.

If you’re traveling from that far away, you want to travel in comfort. The Bombardier Global 5000 has three distinct cabin zones so you have space to work, play, and sleep. The wide cabin is just as roomy as that of the newer and slightly larger Global 6000.

If you want to travel in style, you can’t go wrong with a Bombardier Global 5000.

Another member of Bombardier’s outstanding Challenger class, the Challenger 604 is one of the most popular planes for charter and private flights to Hawaii, and for good reason.

The whole Challenger 600 series displays superior flight technology and comfort. It has a range of 4,000 nautical miles, meaning that you can comfortably reach Hawaii from almost anywhere in the United States.

The roomy cabin will also ensure that you can travel in comfort. You can fit up to 19 people on this private jet, meaning that you can bring your whole friend group or extended family with you on vacation!

Do you want to sprawl across a spacious interior cabin with enough room for yourself and your entire family? Do you want to be able to get to Hawaii from anywhere in the world? Then a converted passenger liner such as the Airbus A330 Corporate Jet is the plane for you, boasting a travel range of 13,450 Nautical Miles.

The Airbus A330 sets the standard for luxury in private planes, especially when it comes to heavy jets. The latest A330neo features advanced engineering for superior flight range and experience. The cabin is so spacious it feels like a flying apartment that you can easily customize with designer furniture.

The Airbus A330 may feel a little excessive, especially if you are only coming from the West Coast. However, it doesn’t hurt to dream about flying in style.

It’s easy to see why. The G650ER is one of the fastest private jet planes in the world and has an extensive range.

Interior amenities include air-purifying technology, spacious seats, and a quiet cabin: everything the rich and famous could ever want. 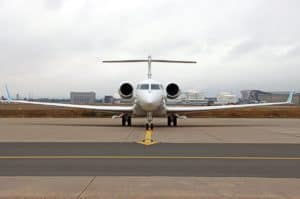 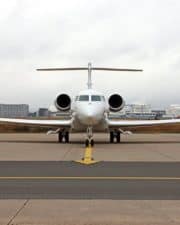