The Gulfstream G650ER is an extended-range version of the G650, produced by Gulfstream Aerospace. It is one of the world’s longest-range business jet capable of flying with a maximum operating speed of Mach 0.925, built with a cabin that complements its flight capabilities. 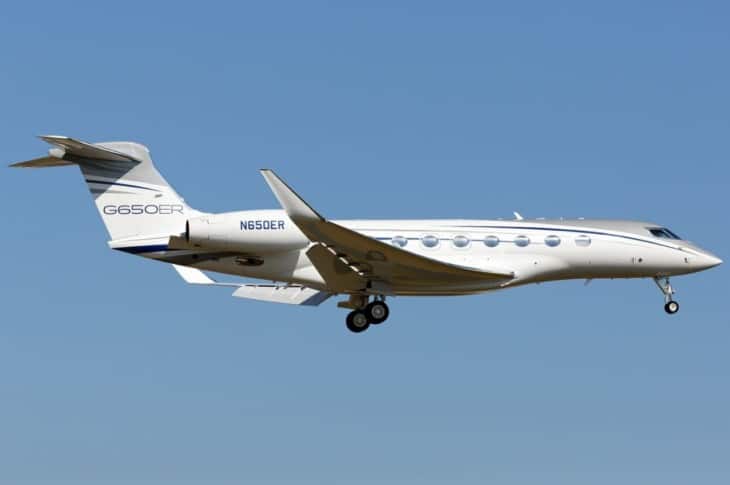 In May 18 2014, the G650ER was launched at the annual European Business Aviation Convention and Exhibition (EBACE) in Switzerland. It received its Federal Aviation Administration (FAA) type certificate in October 2014 and started deliveries in last quarter of 2014.

In March 2014, a G650ER development aircraft had a non-stop flight from Hong Kong to New Jersey, then also from Los Angeles, California to Melbourne, Australia.

In 2015, G650ER set a record for the longest non-stop flight with a range of 8,010 nautical miles from Singapore to Las Vegas carrying four passengers and crew. However, in March 2019, the record was outpaced by Bombardier Global 7500; then in April 2019, the G650ER retook its record as the longest range business jet at an average speed of 597 miles per hour over a distance of 8,379 nautical miles from Singapore to Tucson, Arizona.

In October 2014, Gulfstream signed a Memorandum of Understanding (MoU) with Qatar Airways for purchase of 20 new aircraft including the G650ER. This MoU set the start of relationship between these two companies. In May 2015, the order has grown to 30 more aircraft.

In December 2015, Gulfstream delivered the first G650ER to Qatar Airways.

The flight deck of G650ER is supported by a three-axis-fly-by-wire technology that creates an enjoyable flight. It provides features that help to increase fuel intake and decrease weight. The streamlined displays of the PlaneView II flight deck aids the pilot to reduce workload by observing aircraft position, nearby airways, airport information, weather information, surroundings, and flight conditions.

The flight management system is associated with flight displays and Cursor Control Devices (CCD) that assists the pilot to command and control the aircraft. The critical data is presented in a user-friendly format that boost situational awareness and promptness of response of the pilot.

The aircraft also features a steep-approach certification and Enhanced Flight Vision System (EFVS) which provides an image better than unaided human vision and displays it to the pilot.

There is Aircraft Health and Trend Monitoring System (AHTMS)- powered PlaneConnect HTM systems used in order to collect and transmit aircraft performance data to assist in identifying issues before they take place, and to aid in troubleshooting issues that are hard to detect.

Gulfstream G650ER boast a large cabin that caters to every passenger’s needs.  The aircraft cabin has a roomy interior with a length of 14.27 meters, height of 1.91 meters, and width of 2.49 meters. It can be custom-built depending on the preference of the passenger.

It is designed with 16 panoramic oval windows, has spacious seats that can be converted into beds, wide aisles, forward or aft galley and lavatories. It also includes television, audio and video devices, and built-in wireless internet connection for entertainment purposes.

There is a Gulfstream Cabin Management System (GCMS) mobile application that lets the passengers control the cabin temperature, electronic devices, and window shades and lights.

The ultimate cabin experience that G650ER features will bring comfort and relaxation to every passenger traveling.