The Gulfstream G600 features the notable Symmetry Flight Deck from Honeywell which presents touchscreen technology that intends to provide wide-range functions by lessening pilot’s workload. It is designed with advanced touchscreen controllers, Next Generation Flight Management System (NGFMS), and other innovations. 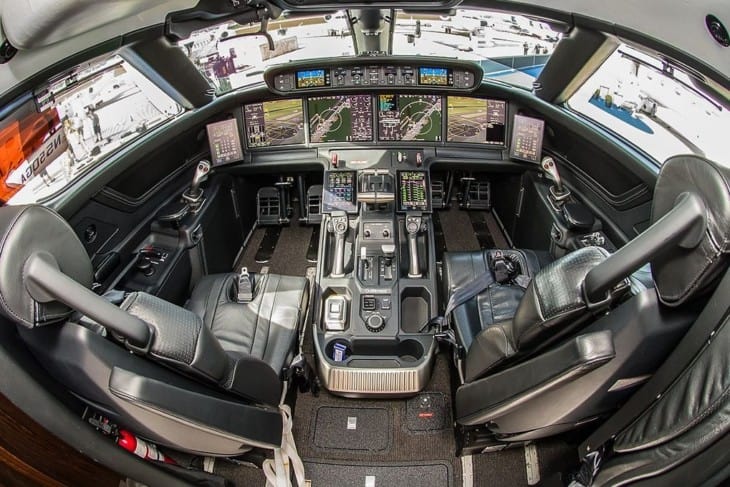 Manufactured by Gulfstream, The G600 was announced at the Farnborough International Airshow in France, in July 2018. In August 2017, first flight of a fully furnished G600 took place. It was the fifth and last aircraft that joined the G600 flight-test program. In October 2017, the company released the first fully outfitted G600 at the NBAA Business Aviation Convention and Exhibition (NBAA-BACE) in Las Vegas, Nevada.

In February 2018, the aircraft made its first Asian appearance at the Singapore Airshow.

Announcement of the G600 type and production certificates from Federal Aviation Administration happened in June 28 2019. In August 8 2019, the first G600 was dispatched.

The Gulfstream G600 has a cross-sectional fuselage with a diameter of 2.57 meters. The fuselage has a low-mounted wing configuration and a tailplane that is mounted to the top of the fin. The engines are located on both sides of the fuselage.

G600 has a length of 29.3 meters, height of 2.54, and a wingspan of 28 meters. The wing is designed with supercritical airfoil that helps to hold the beginning of wave drag in the transonic speed range.

The Symmetry Flight Deck has technologically-advanced features that increase accuracy, convenience, and security. It is built with ten touchscreen displays that supply data such as air traffic and environmental, destinations, maps, and other necessary information.

Moreover, it has a “Phase-of-Flight” intelligence that aids the pilot and decrease the time it will take to drive the aircraft. There is also an Enhanced Flight Vision System (EFVS) that is connected to the head-up display.

The cabin of G600 has a dimension of 13.7m x 2.4m x 1.9m. This spacious cabin can seat a maximum of 19 passengers on board, and can be customized to have three living areas.

There is a private rest compartment for the pilots, a plush reclining seat, large entertainment screen, and a high-speed wifi connection perfectly designed to bring comfort and relaxation for long flights. It has touchscreen features covered at the back of sliding wood panels that can control aircraft interior and plane’s electric sunshade.

The G600 has the best in class cabin sound levels; it has a low cabin altitude and 100% fresh air that boost mental alertness and decrease exhaustion. It is also built with 14 panoramic oval windows that fill the cabin with natural light.

The Gulfstream G600 cabin can be configured depending on the customer’s need.