In some of the most formidable Allied battles, British fighter air power proved dominant. Such celebrated conflicts like the infamous Battle of Britain being wholly outnumbered, 704 Hurricanes, Spitfires and other British fighter planes faced off against a force of 3,500 German Luftwaffe fighters and bombers, culminating in one of history’s most dramatic and infamous battles for the British homeland and Allied supremacy.

Throughout World War II Great Britain and its Allied partners understood the need to produce and bring in to service air power in the form of bombers, reconnaissance and fighters. Especially after ground forces were experiencing increased provocation by the power of German fighter planes air strength and such epic conflicts as the Battle of Britain, Britain was motivated and ambitious in its quest to gain air superiority over Axis forces. Keen is the fact that in the early years of World War II, Britain and France stood virtually alone in Allied air combat capabilities.

During the period of 1934 through 1945, the British military lists over 60 fighter planes. Several countries provided the planes that would become listed in the RAF arsenal. However, Great Britain designed and produced a great number of its air strength fighter planes. Below are five British built fighter planes that saw heroic work during World War II.

The de Havilland Mosquito (“Mosquito”), one of the most celebrated fighter planes for the British RAF, was not birthed as a fighter. By the end of World War 2, the Mosquito would join ranks as one of the supreme air fighters of the conflict. Originally developed as a bomber, she went on to become one of the best British fighter planes of ww2.

She was large for a fighter, with a wingspan of just over 54 feet and a total length of just over 42 feet. The Mosquito was considered one of the most versatile twin-engine props built during the period of 1939 to 1945 and she remained in service well into the 1950s.

During the Second World War, over 6,700 Mosquitos were delivered for service. Twenty-seven variants of the original Mosquito were placed into service. It went on to serve the British homeland, continental Europe, and from the Russian front to Far East Asia. It is credited for the success of many of the most significant operations of the air.

The Mosquito was powered by two Merlin 21/23 engines that provided 1,480 hp at 12,250 feet elevation. Her greatest success as a night fighter was due to its incredible range, which could reach up to 1,905 miles with retrofitting two 50-gallon drop tanks.

As a fighter, the Mosquito was first put into service in 1941 over France. Within the year, its usage evolved into increasing aerial fighter missions. The Mosquito fighter status began as homeland defense and predominately as a night fighter, carrying airborne radar due to its reputation for speed and long-range capabilities.

The Mosquito’s armament power consisted of four-20mm cannons in front belly and four-8mm Browning machine guns in the nose. It was also outfitted with arrowhead radar and a G-45 machine gun. The Mosquito was known for her payloads, with some versions equipped with a 57 mm cannon for piercing armored vehicles or the 4,000 pound “block-buster” bomb.

Its formidable range and load capabilities could reach German sites and out distance most German night fighters with relative ease. Ultimately, the Mosquito was exceptional on every qualifying sphere.

Hawker Hurricanes (“Hurricane”) were born out of the British evolution of rugged and durable air fighters. The Hurricane is given primary credit for the RAF victory in Battle of Britain, racking up more kills than its partner the Spitfire.

This fighter plane was powered by the Rolls-Royce Merlin engine. Its capabilities were further enhanced by a retractable undercarriage (the first such design) and enclosed cockpit. This combination resulted in the first RAF fighter to exceed 300 mph.

Its light tube construction was originally covered by fabric, but in later adaptations was metal skinning on the wing. Her overall dimensions were sturdy 40 feet wingspan and just over 32 feet length.

The Hurricane’s prowess was in its adaptability. Initially constructed as air defense, its variants included retrofitting for CAM spool launch and hook landings on aircraft. It ultimately provided service as fighter, bomber (it could carry two-500-pound bombs), and merchant shipping air support. As a long-range fighter-bomber, its range was increased from 460 to 920 miles by adding two 44-gallon auxiliary tanks.

The Hurricane was designed in 1934 by Sydney Camm. It was placed into service in 1937 and throughout the war 14,533 fighters were produced. It’s noteworthy that Hurricanes carried heavy armament, including twelve 8mm Browning machine guns and up to two 500-pound bombs or eight rocket missiles.

Of the many fighters during World War II that were commissioned by the British RAF, there is little debate that the Spitfire, also known as the Supermarine Spitfire, was the most notable and distinguished fighter in its arsenal.

No British plane was more tactically important and versatile than the Spitfire to the RAF. The Spitfire heralded victories in almost all major campaigns, including Normandy, Battle of Britain, South Africa, Italy, Malta, and the Far East.

The Spitfire was the quintessential British fighter during World War II, its renown effectuated by its versatility and reliability. Where American pilots championed the Mustang, the RAF campaigned the Spitfire and it became the RAF pilot favorite.

Reginald Mitchell oversaw the design of the Spitfire. Arguably the Spitfire had no inherent design weaknesses. It was built for speed and responsiveness and its elliptical wings are its most distinguishing feature.

The almost 37 feet wingspan reduced drag, as did the almost 30 feet aerodynamic light aluminum body and enclosed cockpit. These features not only reduced drag but maximized the fighter’s maneuverability.

Equal to the Spitfire’s design success was its powerful engine, which was in the form of the iconic Rolls-Royce Merlin (and later the Griffon) reaching 975 hp at its height. During later production the Griffon took over the engine power plant that culminated at 2,035 hp at its extreme advancement.

The quintessential combination of body design and engine power provided increasing speeds of up to 440 mph and elevation limits of 40,000 feet, outranking its German counterparts and proving itself as Britain’s lethal fighter class and Allied air supremacy.

Other notable features were its fire power consisting of 4-20 mm automatic cannons.

The Spitfire was originally intended as a short-range air defense fighter against enemy air fighters and bombers, however it had at least 20 style variations that covered the expanse of full fighter-bomber capabilities throughout WW II.

In addition to low, mid-range, and high-altitude fighter capabilities, other versions including outfitting it with tail hooks for aircraft landings, and long-range bombing when the outboard tanks were removed; it could carry up to a 500-pound bomb underside and 250-pound bomb under each wing

Production records reveal that 20,340 Spitfires were produced throughout World War II. Only 179 are estimated to still exist. The Spitfire’s supreme adaptability allowed a cohesive transition from the era of prop engines to jet propulsion aircraft.

The Spitfire continues to live on in the hearts and minds of Brits and military enthusiasts alike. The Spitfire is still among the most revered British fighter planes of ww2 both collected and flown today.

The Westland Welkin is a notable British twin engine heavy fighter designed for aerial combat at extreme altitudes. The Welkin name means “vault of heaven” and alludes to the plane’s stratospheric fighter range.

Its purpose of design was to protect against anticipated threats of German high altitude bombing on British soil, based on the increased production of German monoplane reconnaissance bombers, such as the Junkers Ju 86P. It was clearly a high elevation fighter.

The Welkin found its strength and effectiveness via its 70 feet wingspan and high aspect wing ratio. Additionally, pilots could endure its operational limit of 45,000 feet by its high-pressure cockpit. As a caveat, the pressurized cabin could only provide 24,000 feet psi at maximum elevation, requiring the pilot to wear flight oxygen and a high-altitude pressure suit.

Additionally, the Welkin was equipped with four Hispano 20 mm cannons mounted. Its guns were affixed to an underbelly tray for ease of loading and to minimize pilot blinding from muzzle flash.

The Welkin had a couple of notable weaknesses. During initial production it was powered by an underwhelming Rolls Royce Peregrine engine that became problematic for power climb. This engine was later replaced by the more impressive Rolls Royce Merlin Mk.76/77. Additionally, at high altitudes the long and heavy wings caused significant drag and low flight envelope stability, resulting in a high incidence of stalls and shock stalls.

The Welkin was designed and constructed by the Westland Aircraft Company from 1942 to 1943. However, because the perceived German threat of high altitude bombing never materialized, only 77 were fully produced with an additional 26 rollers. The existence of the Welkin was only made known at the end of World War II.

The first and only Allied jet fighter to see service during World War II was the Gloster Meteor. It maintained a very conventional body design.

Although designed with the newest propulsion system, the technology was still in its infancy and resulted in the Meteor barely faster than Britain’s piston Spitfire and difficult for RAF pilots to fly.

Jet propulsion also exhibited high fuel consumption, so long-range missions were out of its realm. The RAF pilots felt the Meteor was rather easy to handle, except at high speed dives, where it could lose straight maneuverability.

The Meteor’s service was restricted to homeland defense and short-range bomber escorts, due both to the jet fighter’s range limitations and the Allied fear that the Meteor’s design secrets could be captured by Germany if one was shot down.

Production timelines were delayed, so the Meteor did not take service until 1945 and few were actually built (about 210). By the time the Meteor was placed into RAF service, most air combat was off British soil late into the war, it was less imminent than when designing began to overcome the German Messerschmitt-ME 262.

Ultimately, though the Meteor’s World War II service pales in comparison to the likes of the Spitfire and Hurricane, it has the prestigious honor of suffering zero enemy losses during World War II and continued service until the 1980s and served throughout the Korean War conflict. 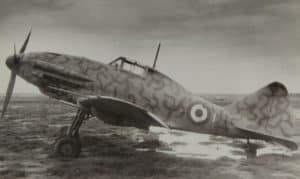 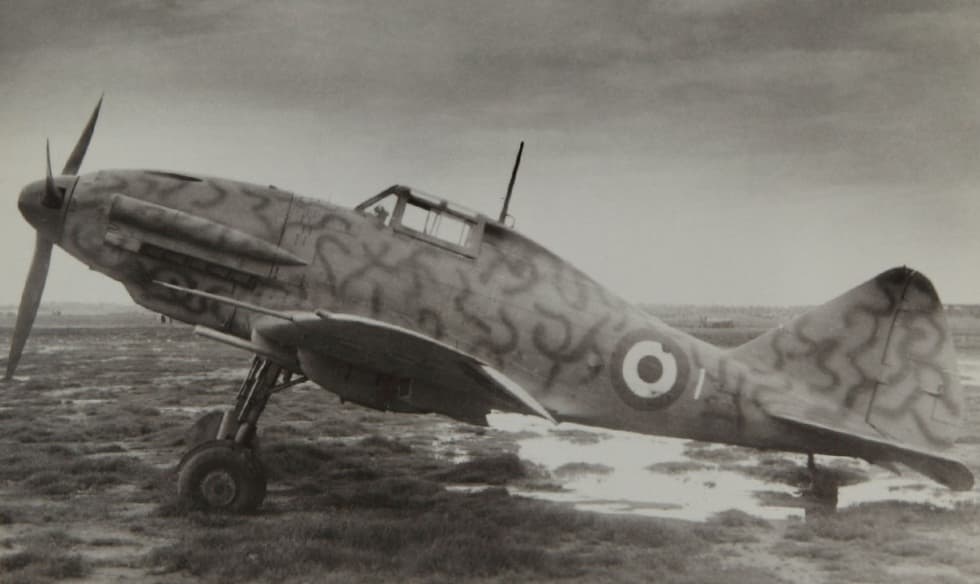