The Vought F6U Pirate was designed by Chance Vought as the first jet fighter of the company. Built during the mid-1940s, it was intended for the United States Navy. It first flew in October 1946 and was canceled in 1950. A total of thirty-three aircraft were built. 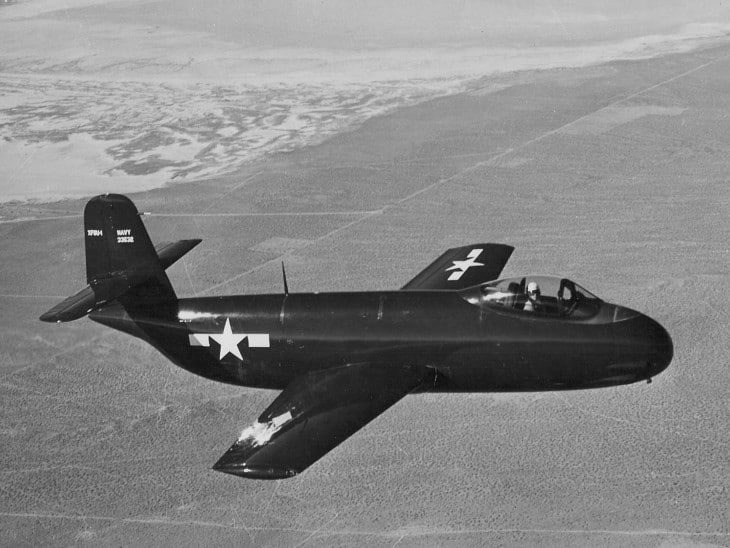 The Vought XF6U was a prototype fitted with tricycle landing gear, short and straight wings without needing to fold, and tail surfaces. It was designed with a retractable nose gear to fit better into crammed hangars. The aircraft was also fitted with Metalite on its skin which is an uncommon feature for the XF6U.

Three XF6Us were built. On October 2, 1946, the first prototype powered by a Westinghouse J34-WE-22 rated at 3,000 lbf was designated as Pirate and took to the air for the first time. On November 10, 1947, the third prototype performed its maiden flight. In 1947, a total order for thirty production aircraft was placed. The new aircraft was fitted with an ejection seat, a newly designed vertical stabilizer, and two auxiliary fins. On June 29, 1949, the first production version designated as F6U-1 conducted its first flight.

The F6U-1 was an afterburner-equipped production variant fitted with a single seat for the crew. It has an external length of 11.46 meters, an external height of 2.4 meters, and a fuselage diameter of 1.2 meters. The tail height is 3.39 meters and the wheelbase is 4.8 meters. It has a wingspan of 10 meters and a wing area of 18.9 square meters. The aircraft has an empty weight of 3,320 kg, a gross weight of 5,850 kg, a maximum payload of 600 kg, and a fuel tank capacity of 650 US gal.

The F6U-1 was powered by a single Westinghouse J34-WE-30A turbojet engine. It has a single-spool eleven-stage axial compressor, annular combustors, and a two-stage turbine. It produces a maximum dry thrust of 3,150 lbf and an afterburning thrust of 4,224 lbf. The aircraft has a maximum speed of 517 knots and a travel range of 1,020 nautical miles. It can fly up to 46,260 feet and can climb at a rate of 8,060 feet per minute. The F6U-1 could also be loaded with four 20 mm M3 cannon located under the nose.