The LTV A-7 Corsair II was designed and produced by the American company Ling-Temco-Vought (LTV) as a carrier-capable subsonic light attack aircraft in the early 1960s. It was built to replace the Douglas A-4 Skyhawk and was developed from the Vought F-8 Crusader single-engine air superiority jet aircraft. The aircraft first flew in September 1965 and was introduced with the United States Navy in February 1967. 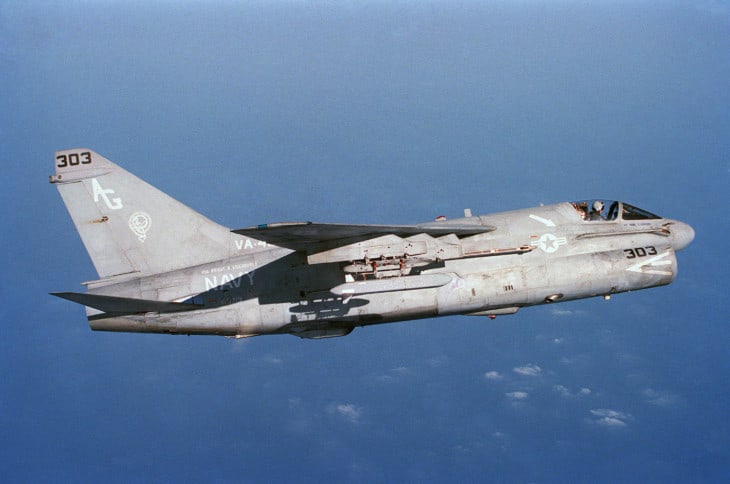 Blog posts that mention the LTV A-7 Corsair II:

In September 1965, the first A-7 conducted its maiden flight. On November 2, 1965, the manufacturing company showcased to the public the initial pair of the aircraft to 1,000 guests. On February 1, 1967, the aircraft entered squadron service with the United States Navy. Toward the end of the year, the A-7s were deployed outside the United States to serve during the Vietnam War. The aircraft also served with the Greek Air Force and Portuguese Air Force in the 1970s and the late 1980s, respectively. It was produced from 1965 to 1984 with a total number of 1,545 A-7s built.

The aircraft is powered by a single Allison TF41-A-2 non-afterburning turbofan engine rated at 15,000 lbf thrust. It has a maximum speed of 600 knots at sea level, 562 knots at 5,000 feet with twelve Mk82 bombs, and 595 knots at 5,000 feet after dropping bombs. The standard range with maximum internal fuel is 1,070 nautical miles and the ferry range is 1,342 nautical miles with maximum internal and external fuel. It can fly up to 42,000 feet and can climb at a rate of 15,000 feet per minute. It has a takeoff run of 1,705 meters at 19,000 kg. The aircraft could also be loaded with several armaments such as guns, missiles, rockets, and bombs, and was also equipped with various avionics system.