The Vought F7U Cutlass was designed and produced by Chance Vought as a carrier-based jet fighter and fighter-bomber of the United States Navy during the Cold War era. The F7U was the final designed aircraft of Rex Beisel and was built without tail assembly and no other horizontal surface aside from its wings. It first flew in September 1948 and was introduced in July 1951. The aircraft was produced from 1948 to 1955 with a total number of 320 built. 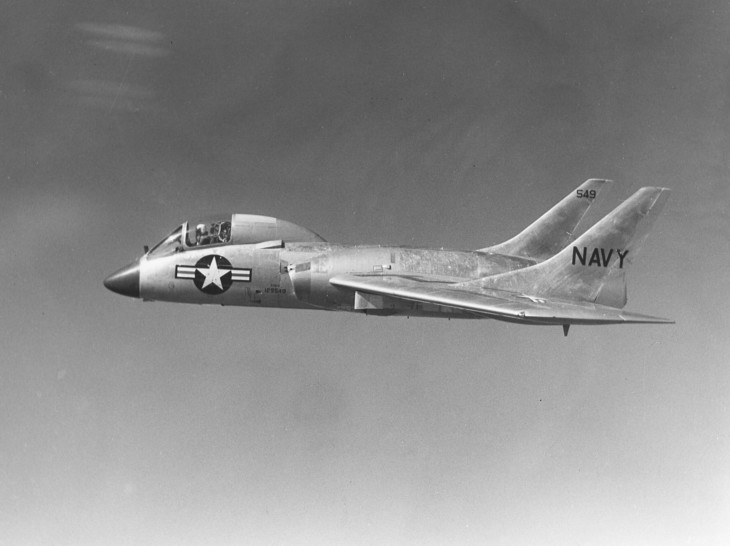 On June 25, 1946, three prototypes designated as XF7U-1 were ordered. On September 29, 1948, the aircraft took its maiden flight. The F7U-1 was the initial production variant, the F7U-3 was a definitive production variant, and the F7U-3P was a photo-reconnaissance variant.

The aircraft is powered by two Westinghouse J46-WE-8B engines. It is an afterburning turbojet engine with a single-spool twelve-stage axial compressor, annular combustors, a two-stage turbine, and a wet sump oil system. It produces a maximum dry thrust of 4,600 lbf each and an afterburning thrust of 6,000 lbf each. The F7U has a maximum speed of 606 knots at sea level with military power and afterburner.

The cruise speed is 490 knots at 38,000 feet to 42,000 feet and the stall speed is 112 knots power off at take-off and 93.2 knots with approaching power for landing. The combat range is 800 nautical miles. It can fly up to 40,600 feet and can climb at a rate of 14,420 feet per minute with military power plus an afterburner. The take-off run in calm conditions is 486 meters with military power and afterburner.

The aircraft could be armed with four 20 mm M3 cannon located above inlet ducts with 180 rounds per gun, and four hardpoints with a capacity of 2,500 kg with provisions to carry combinations of four AAM-N-2 Sparrow I air-to-air-beam-riding missiles.