The Curtiss SB2C Helldiver also named the A-25 Strike, was built by the American company Curtiss-Wright in the Second World War. The aircraft was a replacement of the Douglas SBD Dauntless as a carrier-based bomber in service with the United States Navy. It performed its maiden flight in December 1940, was introduced in 1942, and was retired in 1959. The aircraft was produced from 1943 to 1945 with a total number of 7,140 Helldivers built. 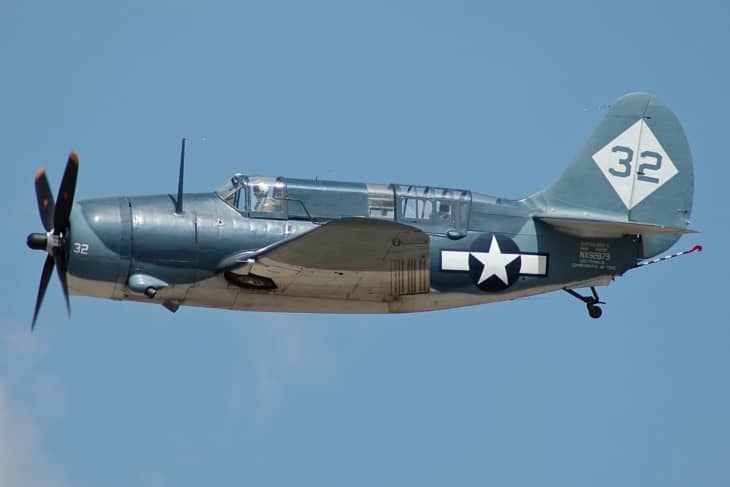 The aircraft is fitted with a single Wright R-2600-20 Twin Cyclone engine. It is a fourteen-cylinder supercharged air-cooled two-row radial piston engine with two pushrod-actuated valves per cylinder with a sodium-cooled exhaust valve, a single-stage two-speed centrifugal-type supercharger, a Stromberg downdraft carburetor with automatic mixture control, a dry-sump with one pressure pump and two scavenge pumps oil system, and an air-cooling system. The engine produces a maximum takeoff thrust of 1,900 hp and drives a four-bladed constant-speed propeller.

The aircraft could be armed with two 20 mm AN/M2 cannon located in the wings, two 7.6 mm M1919 Browning medium machine guns in the rear cockpit, and four 13 mm M2 Browning heavy machine guns- two each in gun pods mounted on the underwing hardpoints. It is also armed with eight 130 mm high-velocity aircraft rockets (HVAR) and 910 kg of bombs in the internal bay or a single Mark 13-2 aerial torpedo. A 230 kg of bombs were loaded on underwing hardpoints.