The Curtiss P-40 Warhawk was developed and manufactured by Curtiss-Wright Corporation as a single-engine all-metal fighter and ground-attack aircraft during the late 1930s. Developed from the P-36 Hawk, it performed its maiden flight in October 1938 and was retired in 1958. The aircraft was in service with most of the Allied Powers in the Second World War and was the third American fighter aircraft that was most-produced during the war. Production commenced from 1939 until 1944 with a total number of 13,738 aircraft built. 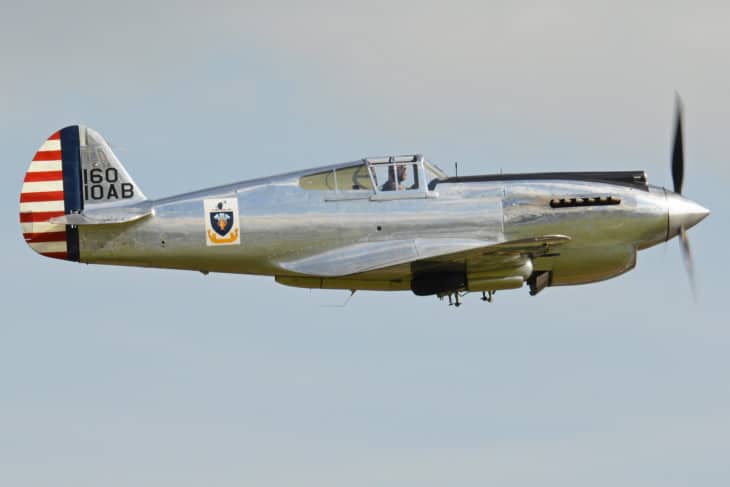 On October 14, 1938, the aircraft prototype designated as XP-40 operated by Captain Edward Elliot took to the air for the first time. The aircraft went through several developments and was produced in different variants.

The Warhawk is a single-engine aircraft powered by an Allison V-1710-39 piston. It is a V-12 supercharged four-stroke liquid-cooled piston engine with two inlet and two exhaust valves per cylinder, a centrifugal-type supercharger, a Stromberg fuel system, a pressure fed oil system, a liquid-cooled air-cooling system, a compact external spur reduction gearbox, and an electric inertia starter.

The engine produces a maximum thrust of 1,240 horsepower and drives a three-bladed Curtis-Wright electric constant-speed propeller. The aircraft has a maximum speed of 290 knots at 15,000 feet and a cruise speed of 268 knots. The travel range is 622 nautical miles at seventy percent power. It can fly up to 29,100 feet and can climb at a rate of 2,100 feet per minute.

The aircraft is loaded with six 12.70 mm M2 Browning machine guns with 235 rounds per gun located in the wings. It is also equipped with 110 to 450 kg of bombs to a total of 910 kg on three hardpoints where one is under the fuselage and two under the wings.