The Curtiss-Wright AT-9 was developed and produced by Curtiss-Wright Corporation as an advanced twin-engined trainer aircraft of the United States in the Second World War. It was built to have the qualities of both a single-engine trainer aircraft and a twin-engined combat fighter. The aircraft was a low-wing cantilever monoplane which first flew in 1941. It was produced from 1941 to 1943 with a total number of 792 aircraft built including prototype and AT-9A versions. 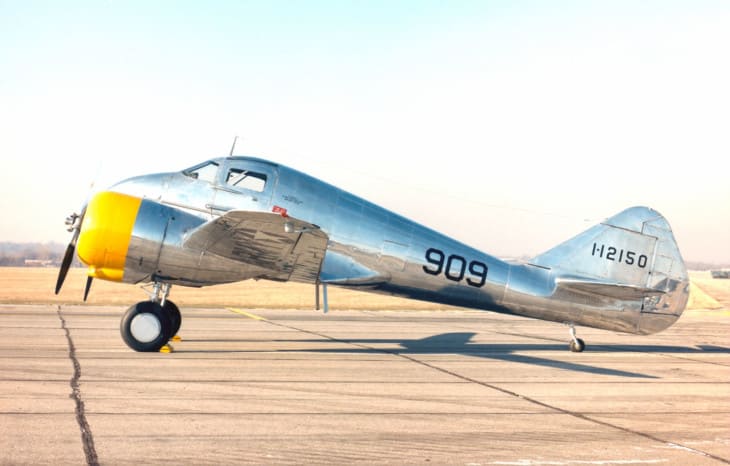 The American manufacturing company Curtiss-Wright developed the CW-25 prototype with fuselage and tail surfaces covered in fabric upon anticipating the need for a high-performing aircraft powered by twin engines. The prototype was built with the characteristics of a light bomber in taking off and landing.

In 1941, it took to the air for the first time. In 1942, the production variant designated as AT-9 entered into service. The manufacturing company gave the aircraft the name  “Fledgling”; however, it became more popular with the United States Army Air Forces designation “Jeep”. The AT-9A version was powered by two Lycoming R-680-11 radial engines and equipped with a modified hydraulic system. The Jeep was produced until 1943 with a total number of 792 aircraft built including prototype and AT-9A versions.

The AT-9 is powered by twin Lycoming R-680-9 engines. It is a nine-cylinder air-cooled radial engine with one inlet and one exhaust valve per cylinder at 30 degrees, a single-barrel carburetor, a full pressure type oil system, and an air cooling system. The engine produces a maximum thrust of 295 hp each and drives two-bladed propellers. It has a maximum speed of 171 knots and a cruise speed of 152 knots. The travel range is 650 nautical miles. It can fly up to 19,000 feet and can climb at a rate of 1,175 feet per minute.