The Curtiss P-36 Hawk was developed and built by the Curtiss-Wright Corporation as an American-built fighter aircraft during the 1930s and 1940s. It first flew in May 1935, was introduced in 1938, and was retired in 1954. A total of 215 P-36s were built plus 900 export Hawk 75 versions. The aircraft was primarily used by the United States Army Air Corps, Finnish Air Force, French Air Force, and the Royal Air Force. 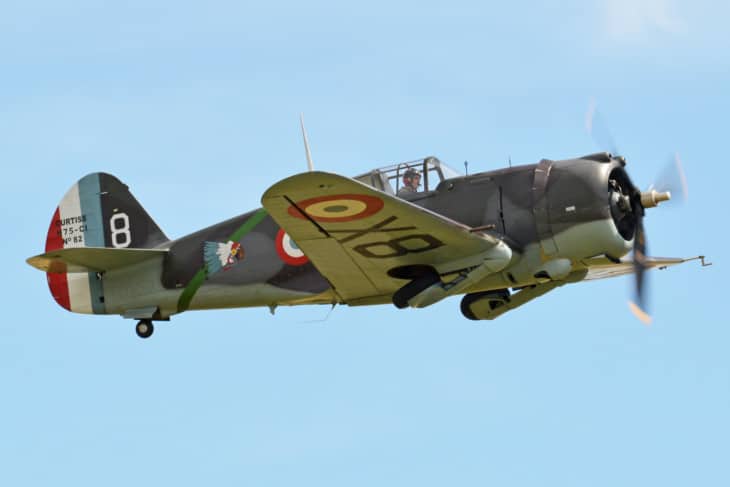 On May 6, 1935, the aircraft prototype took to the sky for the first time. On May 27, it was brought to Wright Field in Ohio to participate in the United States Army Air Corps fly-off, however, the contest was moved to April 1936. The P-36 was produced in various versions and was used by different air forces.

The P-36 Hawk is fitted with a single Pratt and Whitney R-1830-17 engine. It is a fourteen-cylinder two-row supercharged air-cooled radial piston engine with two overhead valves per cylinder, a single-speed General Electric centrifugal-type supercharger, a two-barrel Stromberg carburetor fuel system, an air-cooling system, and an epicyclic reduction gear. The engine produces a maximum takeoff thrust of 1,050 horsepower and drives a three-bladed constant-speed propeller. The aircraft has a maximum speed of 272 knots and a cruise speed of 230 knots. It has a range of 543 nautical miles at 230 knots and 750 nautical miles at 170 knots. It can fly up to 32,700 feet and can climb at a rate of 3,400 feet per minute.