The Avro Lancaster was designed by Roy Chadwick and manufactured by Avro as a British heavy bomber during World War II. It first flew in January 1941 and was introduced in February 1942. It saw service with the Royal Air Force, Royal Canadian Air force, and Royal Australian Air force. The Lancaster was developed from the Avro Manchester and a total number of 7,377 aircraft were built. 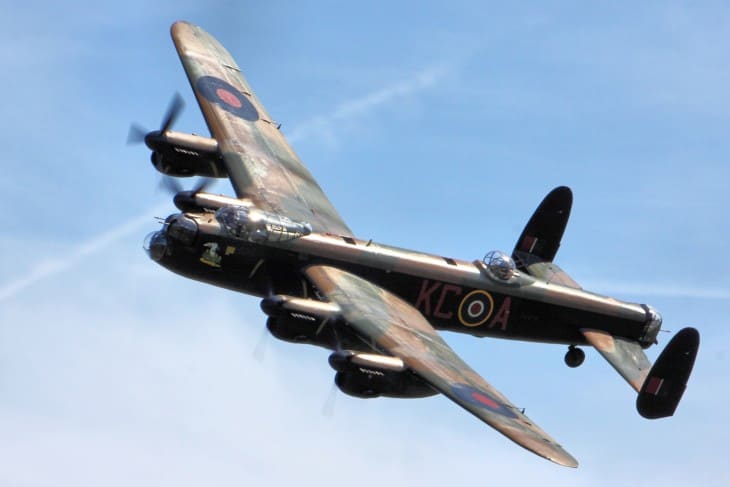 The Lancaster can accommodate seven crew members including a pilot, flight engineer, navigator, bomb aimer/nose gunner, wireless operator, and mid-upper and rear gunners. It has an external length of 21.3 meters, an external height of 5.1 meters, and a fuselage diameter of 1.8 meters. It has a tail height of 6.25 meters and a wheelbase of 12.2 meters. The wingspan is 31.09 meters and the wing area is 120.5 square meters. It has an empty weight of 16,738 kg, a gross weight of 24,948 kg, and a maximum takeoff weight of 30,844 kg. The maximum payload is 10,000 kg and the fuel tank capacity is 2,950 US gal.

The aircraft is powered by four Rolls-Royce Merlin XX engines. It is a twelve-cylinder supercharged liquid-cooled piston engine with an overhead camshaft, two intakes and two exhaust per cylinder, and sodium-cooled exhaust valve stems. It also has a two-speed two-stage supercharger, a twin-choke updraught carburetor with automatic mixture control, a dry-sump with one pressure pump and two scavenge pumps and a pressurized cooling system. Each engine produces a maximum takeoff thrust of 1,280 hp and drives a three-bladed propeller. The Lancaster has a maximum speed of 245 knots at 28,576 kg and 13,000 feet altitude. It has a cruise speed of 170 knots. The travel range is 2,200 nautical miles. It can fly up to 21,400 feet at 29,000 kg and can climb at a rate of 720 feet per minute at 29,000 kg and 9,200 feet altitude.