The Avro Shackleton was built by Avro as a British long-range maritime patrol aircraft that saw service with the Royal Air Force and the South African Air Force. It was a development of the four-engine heavy bomber Avro Lincoln. The aircraft first flew in March 1949, was introduced in April 1951, and was retired in 1991. It was produced until 1958 with a total number of 185 aircraft built. 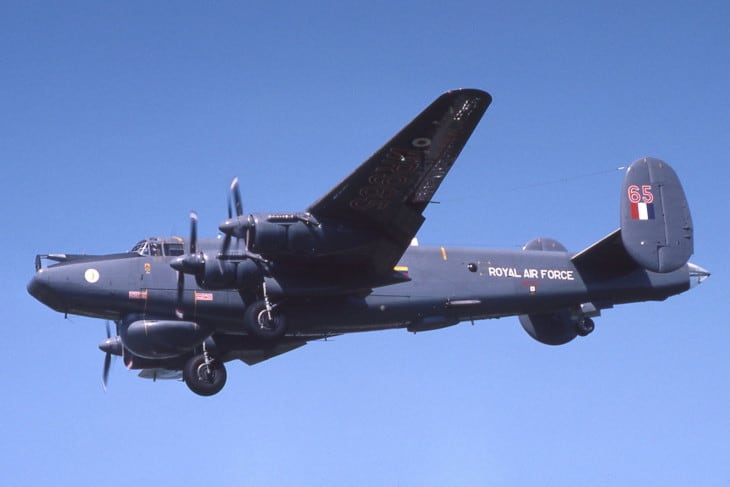 The aircraft is powered by four Rolls-Royce Griffon 57 V-12 liquid-cooled piston engines. It has two intake and two exhaust valves per cylinder with sodium-cooled exhaust valve stems actuated through an overhead camshaft, a two-speed two-stage centrifugal-type supercharger that boosts pressure automatically linked to the throttle, a triple-choke updraught pressure-injection carburetor with automatic mixture control, a dry-sump with one pressure pump and two scavenge pumps, a pressurized cooling system, and a left-handed tractor reduction gear.

It has a water-methanol injection on take-off and produces a maximum thrust of 1,960 hp each. It also drives six-bladed contra-rotating fully feathering constant-speed DH propellers with a 4.06-meter diameter. The Shackleton has a maximum speed of 260 knots. It has a travel range of 1,950 nautical miles and an endurance of fourteen hours and thirty-six minutes. It can fly up to 20,200 feet and can climb at a rate of 900 feet per minute. The takeoff distance is 1,143 meters.

The Avro Shackelton could be armed with two 20 mm Hispano Mark V cannon located in the nose and up to 4,536 kg of bombs, torpedoes, mines, or conventional or nuclear depth charges such as the Mk 101 Lulu. The aircraft was also fitted with avionics such as ASV radar, sonobuoys, Magnetic Anomaly Detector (MAD), and submarine detection equipment.