The Piper PA-38 Tomahawk was designed and built by Piper Aircraft as a two-seat general aviation light aircraft initially intended for flight training and touring, as well as personal purposes. It was fitted with fixed tricycle undercarriage, a T-tail, and low wings. The aircraft was introduced in 1978 and was produced from 1978 to 1982 with a total number of 2,484 aircraft built. 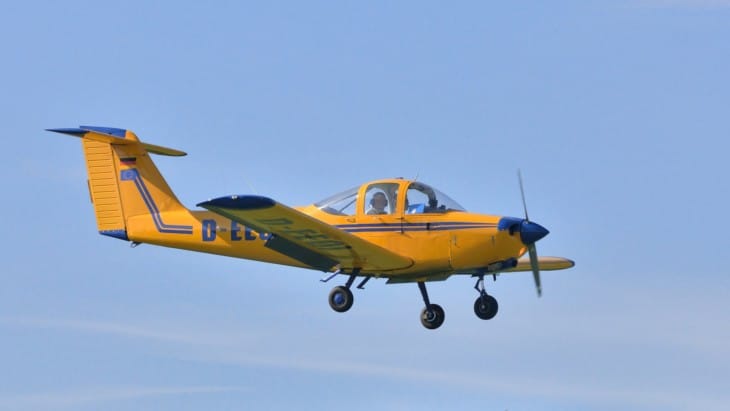 The Piper Tomahawk was developed by Piper in an effort to build an economical two-place trainer aircraft. In 1977, the aircraft was introduced as a 1978 version. The Tomahawk was produced from 1978 to 1982 with a total number of 2,484 Tomahawks built. Tomahawk II was the designation given to the 1981 and 1982 versions. It featured several improvements such as enhanced cabin heating, a windshield defroster, and an updated elevator trim system.

The PA-38 Tomahawk featured an enclosed cabin that can accommodate one pilot and one passenger in flight. It has an external length of 7.04 meters, an external height of 1.95 meters, and a fuselage width of 1.1 meters. The aircraft is a low-wing cantilever monoplane with a wingspan of 10.36 meters and a wing area of 11.59 square meters. It has a T-tail configuration with a tail height of 2.77 meters and a fixed tricycle landing gear with a wheelbase of 1.6 meters. The empty weight is 512 kg and the maximum takeoff weight is 757 kg. It has a maximum payload of 245 kg and a usable fuel capacity of 30 US gal.

The aircraft is powered by a single Avco Lycoming O-235-L2C engine. It is a four-cylinder, air-cooled, horizontally-opposed piston engine with pushrod-actuate valves, a carburetor fuel system, and an air cooling system. The engine is rated at 112 horsepower and drives a two-bladed Sensenich metal fixed-pitch propeller of 1.83 in diameter. The Pa-38 Tomahawk has a maximum speed of 109 knots at sea level. It has a cruise speed of 100 knots at 10,500 feet and 65% power. The stall speed is 49.1 knots with flaps down and the never exceed speed is 138 knots. It has a travel range of 468 nautical miles at 10,500 feet. The aircraft can fly up to 13,000 feet and can climb at a rate of 718 feet per minute. The takeoff and landing distances are 450 meters and 471 meters, respectively.