The Mitsubishi SpaceJet is produced by Mitsubishi Aircraft Corporation as a twin-engine regional jet airliner capable of transporting seventy to ninety passengers in flight. It will be the first airliner developed and manufactured in Japan since the NAMC YS-11 from the 1960s. In November 2015, the SpaceJet performed its first flight. It is still under development and intends to be introduced in 2021. 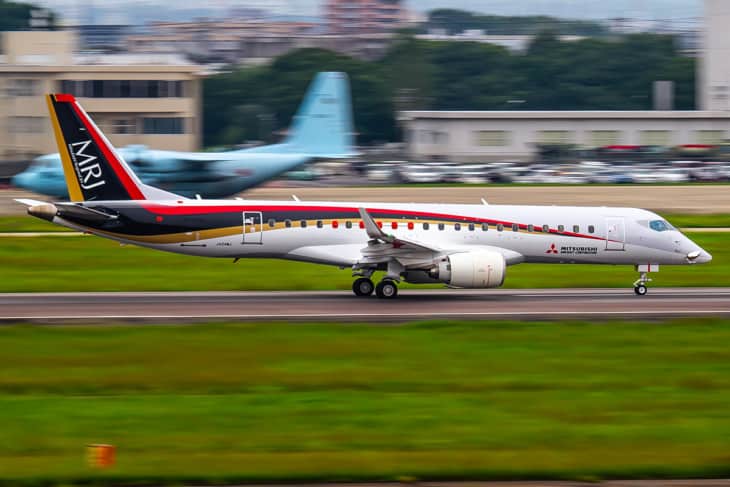 In September 2009, the manufacturing company Mitsubishi revealed substantial modification in the design including the use of aluminum materials on the wings and wing box in place of carbon fiber composites. On September 15, 2010, the company stated that the aircraft already entered the production drawing phase and moving on with the process of manufacturing.

In April 2011, assembly of the first Mitsubishi SpaceJet started. In November 2015, the MRJ90 took to the air for the first time. Flight testing will be performed at the Grant County International Airport in Moses Lake, Washington sinceJapan cannot accommodate the test due to crowded airspace. On November 1, 2016, a static strength test was performed. Aircraft delivery was delayed to 2022.

The SpaceJet is powered by two Pratt & Whitney PW1200G engines. It is a high-bypass geared turbofan engine with an axial-flow one-geared fan, two-stage LP compressor, and eight-stage HP compressor, Talon-X Lean-Burn combustor, and an axial-flow two-stage HP three-stage LP turbine. Each engine produces a maximum takeoff thrust of 17600 lbf. The aircraft has a maximum cruise speed of 447 knots and a travel range of 2,040 nautical miles. It can fly up to 39,000 feet. The takeoff and landing distances are 1,740 meters and 1,480 meters, respectively.