The Mikoyan-Gurevich MiG-25 is a twin-engined interceptor and reconnaissance supersonic jet and was one of the fastest military aircraft that entered service. It was manufactured by Mikoyan-Gurevich and was the final aircraft built by the Soviet aircraft designer and co-founder, Mikhail Losifovich Gurevich before he retired. 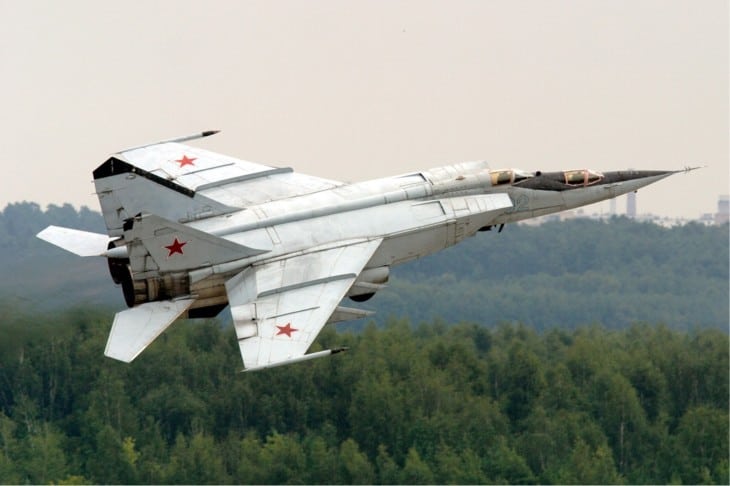 In mid-1959, the development of the new Mikoyan interceptor began. On March 6, 1964, the first MiG-25 prototype designated as Ye-155-R1 took its first flight. In 1970, it entered into service. The Ye-155-R1 was a reconnaissance aircraft with fixed wingtips fuel tanks of over 158-gallon capacity, where mini winglets were mounted to provide stability. However, these were removed when it was discovered that the fuel that flows inside the tanks resulted in vibrations.

Canards, a small forewing were also placed forward of the main wing for better control of the airflow and to increase maneuverability especially during high angle of attacks or a stall. On September 9, 1964, the interceptor prototype designated as Ye-155-P1 conducted its maiden flight. On July 9, 1967, the MiG-25 was unveiled to the public for the first time at the Domodedovo Air Show. Three MiG-25 fighter prototypes and one reconnaissance prototype made a ceremonial flight or flypast.

The MiG-25 took twenty years in the production run. In 1984, aircraft production ended with a total of 1,186 MiG-25 built. The aircraft were in service with the Soviet Air Defense Forces, as well as its allied forces. It is among the highest-flying military aircraft, among the most mass-produced interceptor, and considered as the fastest fighter jet ever produced.

Two Tumansky R-15B-300 turbojet engines powered the MiG-25. It is an axial flow, single shaft turbojet with an afterburner. Each engine produces a maximum thrust of 22,500 lbf. The aircraft has a maximum speed of 1,600 knots at high altitudes and can fly up to 78,740 feet with two missiles. It has a maximum takeoff weight of 36,720 kg.