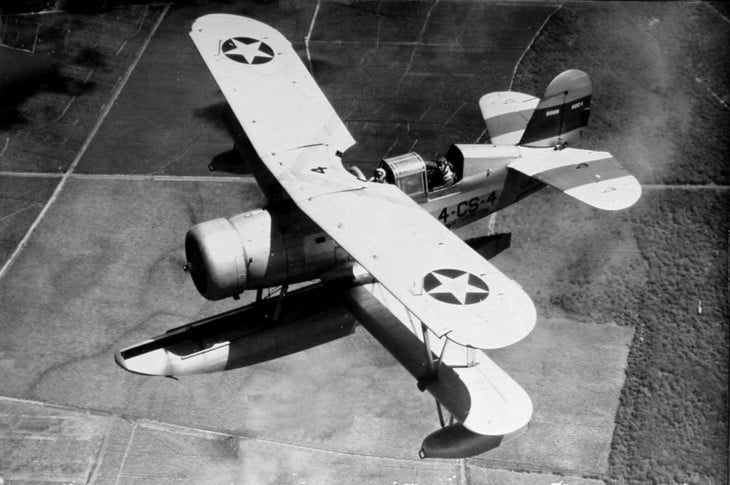 In 1933, the United States Navy ordered for production the SOC Seagull developed by the Curtiss-Wright Corporation. In April 1934, the prototype took to the air for the first time. On November 12, 1935, the aircraft entered into service. It was produced from 1935 to 1940 with a total number of 32 aircraft built; 258 were built by Curtiss-Wright and 64 by the Naval Aircraft Factory designated as the SON-1.

The SOC-1 was an initial production version with an external length of 9.58 meters, an external height of 3.8 meters, and a fuselage diameter of 1.1 meters. It is fitted with two seats for the pilot and the observer. The wingspan is 10.97 meters and the wing area is 31.8 square meters. It has a tail height of 4.5 meters, an interchangeable float, and wheeled landing gear. The empty weight is 1,718 kg, the gross weight is 2,466 kg, the maximum payload is 300 kg, and the fuel tank capacity is 140 US gal.

The aircraft is powered by a single Pratt and Whitney R-1340-18 engine. It is a nine-cylinder single-row supercharged air-cooled radial engine with two overhead valves per cylinder, a single-speed centrifugal-type supercharger, a two-barrel Stromberg carburetor, and an air-cooling system. The engine produces a maximum takeoff thrust of 600 horsepower. The aircraft has a maximum speed of 143 knots at 5,000 feet. The cruise speed is 116 knots and the stall speed is 48.6 knots. It has a travel range of 587 nautical miles at 5,000 feet. It can fly up to 14,900 feet and can climb at a rate of 915 feet per minute.