The Bristol Belvedere was a 2-engine military helicopter that was created to help with freight carrying, troop transport and was given casualty evacuation roles. Even though it wasn’t very successful as a naval aircraft, it accomplished success with the RAF as a troop, supplied weapons, and operated from land bases. 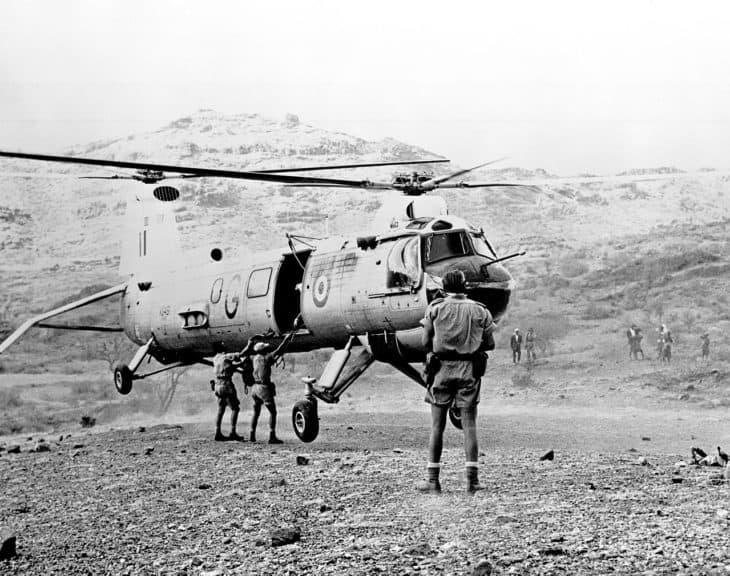 The Bristol Belvedere was the first-ever helicopter designed for passenger transport and commercial operation in particular. The initial prototype that flew in January 1952 was run by two 520hp Alvis Leonides engines and could transport ten passengers.

Further, the tandem rotors were similar to those of the Bristol 171 Sycamore. Trials were performed with this airplane in 1953 from the aircraft carrier HMS Eagle. Another prototype was identical to the first but was customized to test the effects and characteristics of two stub wings and, eventually, a 4-bladed rotor.

Overall, there were 26 Bristol Belvedere created, entering service as the Belvedere HC Mark 1. Keep in mind that the Belvederes were initially created for use with the Royal Navy but were adapted to transport eighteen fully geared troops with a total capacity of 2,700 kilograms.

The design of Bristol Belvedere was mainly based on a canceled civilian design. The helicopter took some design features of the naval types. The engines were placed at every end of the fuselage, thus precluding a rear access ramp and forcing the main cargo or passenger door. That is highly unlikely suitable for loading and unloading.

The original prototype of the Bristol Belvedere had twin engines driving three-bladed main tandem rotors made from wood. After the production began, those were modified to four-blade metal rotors.

Three prototypes 191s were ordered with the Leonides Major power unit for both the Canadian and British Navy’s. Even though the prototypes featured the Alvis Leonides engines, the projected production aircraft were planned to be powered by the Napier Gazelle turbo-shaft engine.

Unluckily, the contract was postponed, with all three 191 prototypes being utilized as development rigs for the following Bristol Type 192 Belvedere program.

In the casualty evacuation role, the Bristol Type 192 Belvedere could transport at least twelve stretches, two sitting casualties as well a medical attendant. That type had a comparatively low fatigue life of at least 1,600 flying hours. That led to it being withdrawn from service by March 1969 after only eight years.

On top of that, it experienced numerous issues, including a possibility to catch fire. That’s why its service life was cut short. As mentioned, a total of only 26 aircraft were designed, of which seven were lost in incidents.

Three remaining survivors are currently on display at Helicopter Museum in Weston-Super-Mare, RAF Museum in Hendon, and the Museum of Science and Industry in Manchester.