The Piper PA-30 Twin Comanche was designed and manufactured by Piper Aircraft as a twin-engined cabin monoplane that first flew in November 1962. The twin-engine PA-30 was derived from the single-engine PA-24 Comanche civil utility aircraft. A total of 2,142 PA-30 were built. 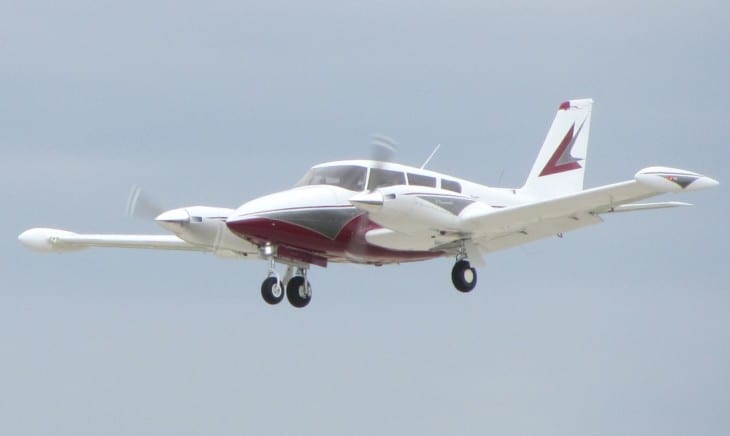 The Piper PA-30 Twin Comanche was a twin-engine development of the PA-24 Comanche. On November 7, 1962, the aircraft took to the sky for the first time. It was produced at the Piper factory in Lock Haven, Pennsylvania until 1972 when the factory was affected by the flood. A total of 2,142 PA-30s were built. From the 1960s to 1970s, the aircraft suffered several Velocity Minimum Controllable (VMC) loss-of-control accidents. The PA-30 was then planned to be replaced by the PA-40 Arapaho from 1973 to 1974, however, the newer Piper aircraft was not able to proceed with further production.

The Piper PA-30 Twin Comanche can accommodate four to six people in flight. It has an exterior length of 7.67 meters, an exterior height of 1.6 meters, and a fuselage diameter of 1.2 meters. The tail height is 2.51 meters. The low-wing cantilever monoplane has a wingspan of 11.21 meters including tip tanks and a wing area of 16.54 square meters. The retractable landing gear has a wheelbase of 2.3 meters. The aircraft has an empty weight of 1,030 kg and a maximum takeoff weight of 1,690 kg. It has a maximum payload of 310 kg and a fuel tank capacity of 120 US gal with tip tanks.

The PA-30 is powered by a twin Lycoming IO-320-B1A naturally aspirated, air-cooled, four-cylinder, direct-drive engine piston engine. It has an injector offset toward the engine’s fore and aft centerline. Each engine produces a maximum takeoff thrust of 160 horsepower and drives a two-bladed Hartzell HC-E2YL-27663-4 counter-rotating propeller. The aircraft has a maximum speed of 178 knots, a long-range cruise speed of 155 knots, a stall speed of 61 knots with flaps down and power off, and a never exceed speed of 236 knots. The standard travel range is 1,000 nautical miles. The PA-30 can fly up to 20,000 feet and can climb at a rate of 1,460 feet per minute. The takeoff run to 50 feet is 470 meters while the landing run is 570 meters.