The Focke-Wulf Fw 190 was designed by Kurt Tank and manufactured by Focke Wulf as a single-seat fighter aircraft powered by a single-engine. It was developed during the late 1930s and extensively used throughout the Second World War. The aircraft first flew in June 1939 and was introduced in 1941. It was produced from 1941 to 1945 with a total number of over 20,000 aircraft built. 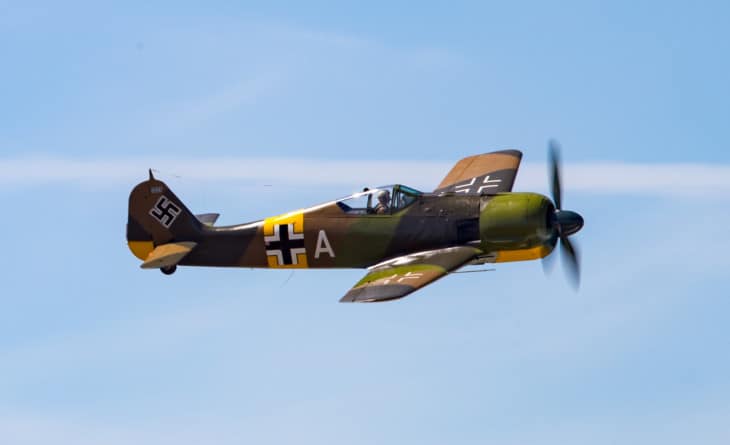 On June 1, 1939, the Fw 190 V1 prototype with civil registration D-OPZE performed its maiden flight. In August 1941, the aircraft entered operational service over France. The Fw 190 was produced in numerous variants from 1941 until 1945.

The aircraft is powered by a single BMW 801D-2 engine. It is a fourteen-cylinder supercharged two-row air-cooled radial engine with one intake and one sodium-cooled exhaust valve per cylinder, a gear-driven single-stage two-speed supercharger, a direct fuel injection, and an air-cooling system with an oil cooler integrated into the forward cowl. The engine produces a maximum thrust of 1,677 hp and up to 1,953 hp and drives a three-bladed constant-speed propeller. The aircraft has a maximum speed of 352 knots at 19,420 feet. It has a standard range of 490 to 540 nautical miles, a combat range of 220 to 270 nautical miles, and a ferry range of 490 to 540 nautical miles. It can fly up to 33,960 feet and can climb at a rate of 3,000 feet per minute.