The Convair B-58 Hustler was the first operational supersonic strategic bomber capable of Mach 2 flight built by Convair, introduced in March 1960. Development commenced in the 1950s to be in service with the United States Air Force’s Strategic Air Command (SAC). 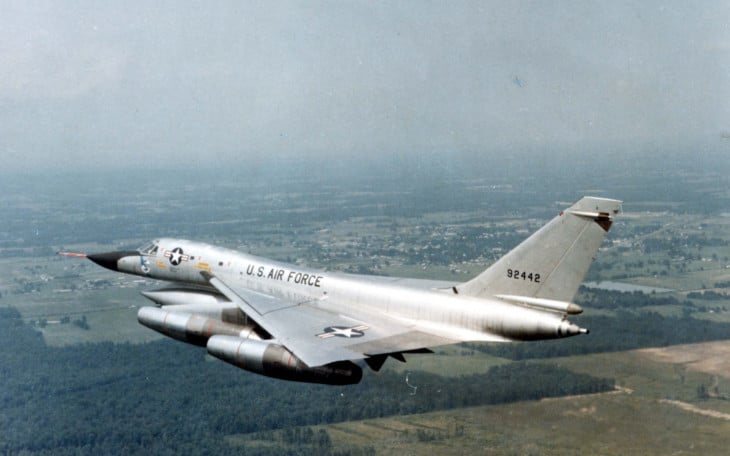 In the 1950s, the aircraft manufacturer Convair started to develop the B-58 specifically for the Strategic Air Command of the United States Air Force. The manufacturing company designed the aircraft with a vast delta wing to obtain the required high speeds and was fitted with four J79 afterburning turbojet engines from General Electric located in underwing pods. The aircraft was not designed with a bomb bay, instead, it had a nuclear weapon and fuel in a combination bomb/fuel pod situated below the fuselage. Four external hardpoints were attached subsequently, allowing the aircraft to lug five weapons.

In March 1960, the aircraft entered service. It was in service for ten years by the 43rd Bombardment Wing, and the 305th Bombardment Wing. Upon consideration, the B-58 was a hard-to-fly aircraft, commanding a great workload for its crew members. It was designed to succeed the B-47 Stratojet six-engined strategic bomber and became famous for its sonic boom which mainly affected people on the ground. The aircraft was initially planned to operate at supersonic speeds and high altitudes to steer clear of interceptors from the Soviet Union. However, the Soviet originated the high-altitude surface-to-air missiles which compelled the B-58 to embrace a low-level-penetration role that extremely narrowed its performance in terms of range and strategic usefulness.