Produced in response to a military requirement of Soviet Union for a strategic airlifter, the An-22 is a military transport aircraft manufactured by Antonov. The great Antonov AN-22 still holds the record as being the largest turboprop aircraft yet built. 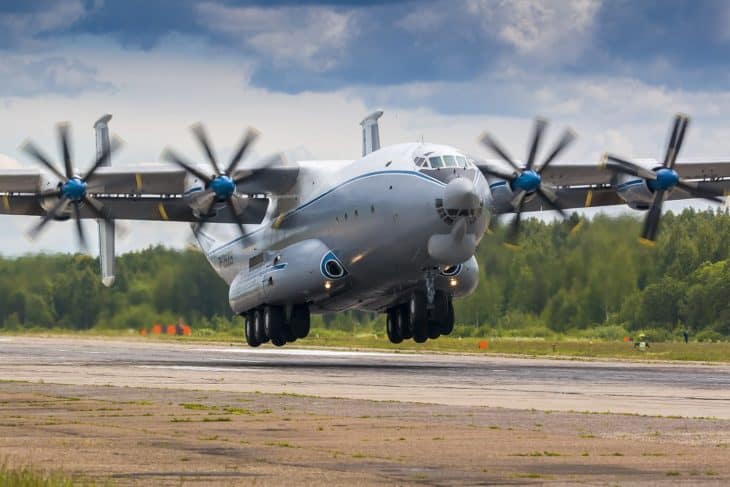 An-22 Antei Production and Development

The Antonov An-22 is a heavy military cargo aircraft and the first megafreighter. During the late 1950s, the Soviet Union demanded for a large military transport aircraft that can carry heavy equipment and ballistic missiles over long distances.

In 1961, development of the aircraft began. The Antonov Design Bureau initially developed the model An-20 that has the typical multi-engine and high wing configuration.  Afterwards, it was designated as the Model 100.

On August 18 1964, the initial model was first rolled out of the hangar and has been designated as the An-22. It was given the name Antei (Antaeus), derived from a giant figure in Greek mythology.

On February 27 1965, the aircraft took its maiden flight. The An-22 Antei were manufactured at the Tashkent Aviation Production in Uzbekistan.

In 1969, the aircraft was delivered to the Air transport Wing at Ivanovo Severny.

The fully pressured tubular fuselage of the aircraft has a wide-body internal volume and an exterior length of 57.92 meters, height of 12.53 meters and diameter of 5.86 meters. The aircraft was intentionally low to the ground while landing that supported during cargo loading and unloading. There is a pressure bulkhead positioned at frame fourteen that splits cargo attendant and main cargo compartment. This lets the large cargo door in the rear side to be opened in flight for paratroops and equipment drop.

The aircraft is fitted with a twin tail arrangement and its strong ruggedized landing gear has fourteen wheels that were designed for gravel runways. It has a wheelbase of 19.7 meters. The aircraft has a high-wing design with a wingspan of 64.4 meters and a wing area of 345 square meters. There were two turboprop engines attached on each wing.

The An-22 Antei has a cabin length of 32.7 meters, width and height of 4.44 meters. It can accommodate up to twenty-nine passengers.

An-22 Antei Engine and Performance

The An-22 Antei is powered by four Kuznetsov NK-12 turboprop engines. Each engine has a maximum thrust of 15,001 horsepower. It is driven by two large four-bladed high-speed propellers with a diameter of 6.2 meters. This turboprop engine is equipped with a fourteen-stage axial-flow compressor that generates pressure ratios from 9:1 to 13:1 based on altitude, with variable-inlet guide vanes that maintain stable flow in the compressor, and blow-off valves for engine performance.

The three initial prototypes of the An-22 were built with glass nose and were assembled in Kiev. The first production version of the aircraft is equipped with external start system and were assembled at Tashkent Aviation Production. Thirty-seven of this type were built.

Another twenty-eight units were built at Tashkent, the enhanced version An-22A that is equipped with air-start capacity. It also features a modified electrical system, upgraded radios and improved navigational tools.

The An-22PZ version is converted from two An-22s. It carries center and outer wing parts of the An-124 or An-225 on the outer and upper part of the fuselage. This version is also equipped with a third centerline fin.

On July 18 1970, a Soviet Air Force flight crashed in the Atlantic Ocean. An uncontrolled decompression was presumed but it has not been proven. This is the first recorded crash of the aircraft that killed all of the seventeen passengers and fifteen crew on board.

On December 28 2010, a Russian Air Force flight crashed in the Tula region of Central Russia. Aviation equipment malfunction or an engine failure was presumed. Twelve people died on this accident.