The Antonov An-12 is a turboprop medium-range, four-engined, cargo and paratroop transport aircraft manufactured by Antonov and primarily used by the Soviet Air Force. The An-12 is the military variant of the An-10. 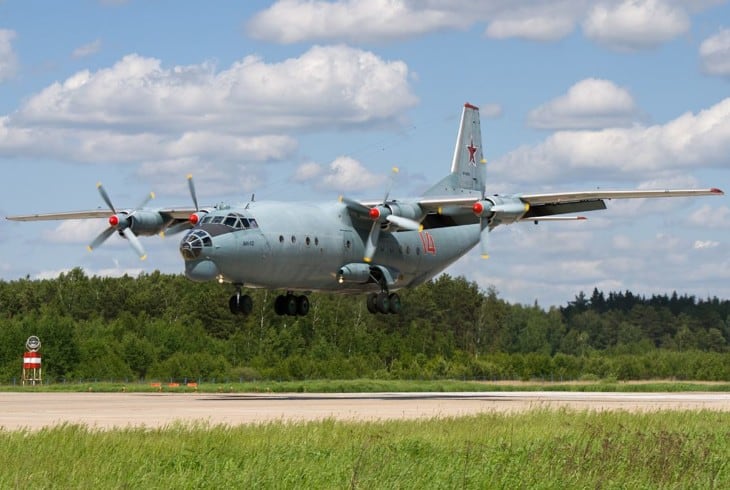 The Antonov An-12 was derived from the An-8 and was a military variant of the passenger transport aircraft An-10. In December 1957, the first prototype took its first flight. In 1959, it entered into service with the Soviet Air Force. Originally, aircraft production took place at the State Aviation Factory in Irkutsk before it was stationed to Tashkent in 1962. 830 An-12 were built at the Tashkent Aviation Plant. Subsequently, the production of the An-12 was transferred to Voronezh and Kazan. The Antonov An-12 was produced from 1957 to 1973.

The Antonov An-12 was utilized in various roles such as search and rescue missions and equipment transport. It was most useful during the Soviet-Afghan War where it was notorious that the aircraft would take off from Afghanistan to Tashkent, Uzbekistan with Cargo 200. The aircraft can carry a maximum of one hundred fully-equipped paratroopers or 20,000 kg of cargo load. Concerning layout, dimensions, and aircraft capabilities, the An-12 is identical with the Lockheed C-130 Hercules. The An-12 is also equipped with a defensive tail gun turret.

The aircraft has an exterior length of 33.1 meters, a height of 11.44 meters, and a fuselage diameter of 3.9 meters. The wheelbase is 9.8 meters, the wingspan is 38 meters, and the wing area is 121.7 square meters. Some aircraft can be loaded with 2×23 mm Nudelman-rikhter NR-23 cannons.

The An-12 is powered by four Ivchenko AI-20L or AI-20M turboprop engines. Each engine has a maximum thrust of 4,000 shaft horsepower. It is a single-shaft turboprop with 10-stage axial-compressor with four bypass valves, annular combustors with ten burner cones, a three-stage axial flow turbine, and a pressure type feed fully recirculating oil system. The aircraft is also equipped with four-bladed constant speed reversible-pitch propellers.