Advanced Multi-Role Civil Airplane The Antonov An-148. Designed by the Antonov Aeronautical Scientific and Technical Complex, this powerful twin-engine commercial plane first had its flight in late 2004. On February 26, 2007, the An-148 received its certification, making it a great option for airliners looking for planes that can easily carry between 68 and 85 passengers. 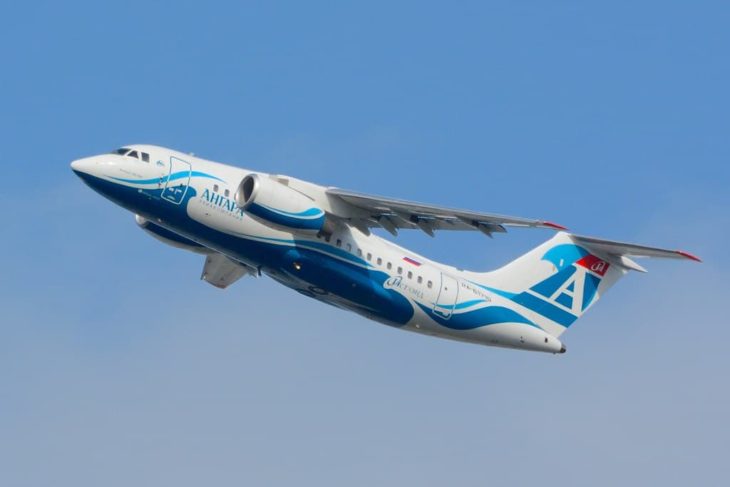 This durable plane has twin turbofan jet engines that are mounted under the wings in pods. This design, as well as the high-wing body and impressive interior, make this a great plane for flying.

The body design is perfect for preventing the wings from being damaged by foreign objects. The included engines are incredibly fuel efficient, making operating this plane less expensive.

Development of the An-148 began in the early 90s. What began as a modification to the An-74 quickly turned into this new plane, which was renamed in 2001. The extended fuselage and the new wing design were both created from scratch.

Manufactured by Kiev AVIANT plant and the Voronezh Aircraft Production Association, the An-148 took to the skies on June 28, 2009. The list price of this aircraft is between $24 and $30 million.

Multiple companies have expressed interest in purchasing the An-148. These include Ilyushin Finance, which placed the first order in April 2005 for a stretched version of the An-148, the An-148-200.

Around 100 aircraft were ordered by airlines of Kazakhstan, Russia, and the Ukraine. Additional buyers include Berkut airlines, Polyot, SCAT, and KrasAir.

As recently as March 2010, UAC signed a contract with the company for 18 aircraft.

This plane has a high-wing monoplane design with a great weight efficiency. By using titanium alloys in components of the plane, the company was able to easily drop the weight to the aircraft.

A state-of-the-art aircraft system and the impressive wing configuration make this plane great to use in many locations. It’s perfect for use in poorly equipped airfields and near foreign objects that could otherwise damage the plane.

Included are anti-theft devices, as well as bullet-proof doors. On the plane, there is also plenty of room for ammunition and weapon storage.

Thanks to the partial glass cockpit in the flight deck, it’s easy for the four crew members to operate. The cockpit has five 6” x 8” LCDs. These were developed by Aviapribor and also feature fly-by-wire flight controls.

One interesting thing about the cabin on the An-148 is that it can have various seating configurations, depending on the needs of the airline. Passenger capacity can vary widely, from 10 to 85 passengers, depending on how the cabin is designed.

There are general, individual, and service areas in the cabin. Modern seats and informational entertainment systems in the passenger area ensure that passengers can easily enjoy their flight. Configurations of the plane include VIP, business, and economy layouts.

Hand luggage can easily be stored in the over-head shelves, which offer 4.2m3 space, which is the most out of short-range and regional aircraft.

Thanks to the design of the cabin, there is very little noise for the passengers, making flying on the An-148 a pleasure.

The engines are designed to really set this plane apart from the competition. It is powered by dual high bypass D-436-148 turbofan engines. They’re designed and produced by Ivchenko-Progress and work to optimize take-off thrust. The take-off thrust is 6830 Kgf. Thanks to onboard monitoring and control systems, the performance of the engine is optimized.

This aircraft can easily take off with a weight of 41.55t. It reaches its cruising speed quickly and can max out between 800 to 870 km/h. The maximum flight altitude is 12,200 m. Thanks to how durable and well designed this aircraft is, it can easily operate between temperatures of -55C to +45C.

The landing gear on the An-148 is typical of most planes of this type. It consists of nose landing gear, as well as left and right main landing gears.

The main gear is able to retract smoothly and easily into wells in the fuselage when it is not in use.

This ensures safety during take off and landing and allows the plane to easily handle some of the rougher landing strips that it sometimes has to use.

Some of the main competition for the An-148 is the Sukhoi Superjet 100 and the Mitsubishi Regional Jet. Another big player in this arena is the Coma ARJ21. Even though the An-148 stands out in a lot of ways, there is still some major competition from other great aircraft.