People have flown on planes that are decades old, and they would never know the difference. Sometimes, old school is the best school, and after having a look at this collection of the oldest commercial passenger planes still in service, it’s hard to disagree.

Older model airplanes were designed at a time when oil was incredibly cheap compared to the modern era. It would be unthinkable for airlines to make a profit running Boeing 707s these days.

So why are some older airplanes kept operational by certain airlines? Some airlines even buy up entire fleets of a certain type such as in the case of Nolinor aviation and their fleet of Boeing 737-200s.

Airplanes are able to last a long time –compared to cars for instance– for a number of reasons. Firstly, airplanes are made to be easily maintained, and are always maintained following a strict maintenance schedule. Pilots are trained specifically for their aircraft and won’t make silly mistakes that would deteriorate the lifespan of the aircraft.

There are a few reasons why airlines keep old planes operational. One place where old airplanes are commonly operated is in the remote regions of Canada. There are remote settlements here as well as mining operations which constantly need transport of people and cargo in and out.

Due to the permafrost in these northern Canadian regions it is impossible to construct asphalt runways, so airlines are forced to use gravel runways for their operations. Not many planes are suitable for these kinds of operations. The Boeing 737-200 fitted with a gravel kit is. I will explain what a gravel kit is and how it works further down the article.

Some airlines such as Delta still operate a fleet of Boeing 757. Despite being one of the oldest planes still in service today, the 757 was a very modern plane with greatly improved fuel economy compared to its rivals when it was introduced. That makes that it’s still a relatively competitive plane to operate these days.

According to pilots, the 757 was a joy to fly partly due to being overpowered with the Rolls Royce engines fitted. As a passenger though, you will most likely be happier on one of the newer airplanes being operated today.

Some airlines have commercial planes that have been around for a very long time. While they don’t necessarily present safety concerns, the ages of some airframes are surprising. Here’s a look at the nine oldest commercial passenger planes still in operation.

Air Inuit has its headquarters in Quebec, Canada. It does domestic, charter, and cargo services in various areas. The airline has been operating since 1978, after acquiring a single De Havilland Canada DHC-2 Beaver. Soon after, the company also purchased a DHC-3, a couple of Twin Otters, and a Single Otter.

By 1988, the company acquired a De Havilland Canada DHC-8-100, which is more affectionately known as the Dash-8. The plane model started with a prototype that flew for the first time in 1983, and it began to serve as a part of NorOntair on October 23, 1984.

The series had gone through a couple of variations by the time Air Inuit purchased the one it operates, which is likely why this aircraft has stood the test of time in the way it has.

Jet2’s Boeing 757-200 aircraft have been in the flight game since 1987. It wasn’t always a part of the Jet2 lineup, as it was previously owned and operated by China’s Civil Aviation Administration, followed by China Southern Airlines. Jet2 obtained the aircraft in 2006.

It is almost unreal how pristine the plane still looks, but Jet2’s seasonal operation style may have something to do with it. While the plane is not the oldest commercial flight of them all, it does have the honor of being the oldest registered in the UK.

Jet2 operates a low-cost commercial airline in the United Kingdom, which offers scheduled and charter flights. It stands as the third largest airline in the country, only losing out to EasyJet and British Airways.

Though Delta airlines obtained it in 1987, it would be almost impossible for you to tell its age when you stand it alongside others. Even Delta Airlines’ internal pool would throw you for a loop, as it currently holds the honor of having the largest fleet of 757 Aircraft in the world.

Of course, the 757-200 is not the only model that comprises its collection, as there several Boeing variants to speak of. While the first-ever 757-200 made its service debut with Eastern Airlines in 1983, Only Jet2 and Delta Airlines manage to hold on to two of the eldest deliveries.

The plane has two different variations. One has a certified maximum capacity of 239, and the other has a maximum of 224, thanks to the presence of over the wing emergency exits. Its maximum takeoff weight is 255,000 pounds, and it thrives best along short and medium-length routes.

Eastern Airlines was once a major contender in the commercial flight market. The company’s run in the industry begun in 1926 and ended in 1991. Today, the Eastern Airlines name continues, albeit under a different organization. Dynamic International Airways, founded in 2010, has rebranded itself to Eastern Airlines after obtaining the required intellectual property license from Swift Air.

The license was also paired with the lease is off two aircraft. The Boeing 767-200 is the narrowest wide-bodied aircraft to be in service. It launched with four different variations, which ranged from short and medium ranged passenger types to military and large cargo types. The model’s deliveries continued for a very long time, considering that Continental Airlines got one in 2001.

Iran Air, which is branded as Iran’s flagship airline, is headquartered in Tehran at the Mehrabad Airport. It currently provides services to over 71 destinations in Europe and Asia. The airline is affectionately referred to as Homa in its home country, which is a reference to a mythical Persian Griffin. Its fleet size currently consists of 41 different planes.

The company was founded in 1944 as Iran Airways Company, and it began its operations as Iran Air in 1961. Many planes have come and gone throughout its operation, but one Airbus A300B2 that was delivered in 1980 continues to take to the skies.

Airbus manufactured this model from 1971 to 1990, and it attracted a price of US $17.5 million. This one, owned by Iran Air, has the distinction of being the oldest Airbus in operation.

Air Inuit’s longest-serving Boeing 737-200 has been active for over four decades. Its model number is B737-2S2C (B732), and it has a loadout of 112 seats. Its statistics are very impressive, which makes you wonder where the years are going. There are months in which the plane completes more than 49 flights, and it manages to keep its delay percentage incredibly low.

While Air Inuit has another aircraft on this list, this one has the distinction of being the eldest in the fleet. Considering that the company was founded in November 1978, this stand-out plane is the first that the airline ever acquired.

Other members of the fleet include Beechcraft King Air 100 series variants, Hawker Siddeley HS 748 2A series planes (used for cargo purposes only), several De Havilland Canada Dash 8s (including the one of 1988), and more.

Venezolana Airlines also has a Boeing 737-200 that has been serving for a very long time. Its registration is YV502T, and it has been with the company since 1978. It even survived a tragedy in May 2019, while it was performing flight VNE-1303. This was a flight from Port-of-Spain, Trinidad and Tobago, to Caracas, Venezuela. As the aircraft was ascending, the left engine failed, and the crew heard a loud bang.

The skillful team declared an emergency and managed to safely land in Port-of-Spain about 20 minutes after the initial departure. The plight resulted in an engine fire, which would necessitate repairs after being put out. The fuselage also suffered some minor damage.

The plan’s first flight was on March 31, 1978, where it served under frontier airlines. It then became a part of the United Airlines’ team in 1985. Vanessa Lana airlines only obtained it in 2011, and they have used it for domestic and regional flights ever since. Thankfully, no passengers were injured.

This plane edges out the one from Venezolana Airlines by a very small margin. While that one took flight for the first time on March 31, 1978, this one did so on February 27 of the same year. The aircraft, with registration EP-CQA, has been through a few hands.

Saha Air stored the plane in 2008, before passing it on to its current owner, Caspian Airlines, in November 2018. With all that movement, it’s almost surprising that the plane performs as well as it does today.

The top spot goes to none other than Canadian operator, Nolinor Aviation, for its Boeing 737-200. Its current registration is G-GNLK, and the company had it delivered in 2014. However, it was manufactured in 1974, and throughout 1975 and onwards, it has had 12 different owners. The first of these was Transavia.

People often wonder why airline operators choose to have such aged units in their fleet, especially since they are often delivered very late in their lifecycle. Nolinor Aviation explained that the 737-200 could handle more difficult conditions than other planes can. For example, the first 737 generation can land on an unpaved surface, narrow runway, ice strip, or gravel strip.

Contrary to most newer planes, the 737-200 is equipped with a low-bypass turbofan engine. In combination with a gravel kit fitted, this turns this particular plane in an outstanding large ‘bush’ plane suitable to takeoff and land on gravel runways.

The gravel kit consists of a vortex dissipator below the turbofan engines. This blows high pressure bleed air down in order to dissipate the vortex created in front of the engine and prevent gravel, sand and dust from entering the engine.

Secondly, there is a nose-ski fitted to the nose wheel. This helps prevent sand and dust from entering the engines. It also prevents gravel bouncing up and damaging the belly of the aircraft.

You can see it nicely explained in the video below. 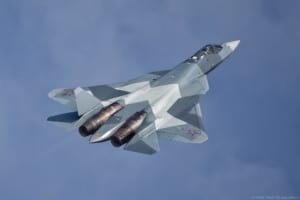 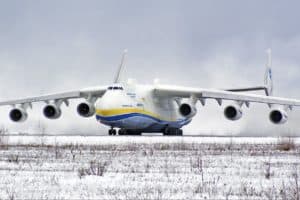 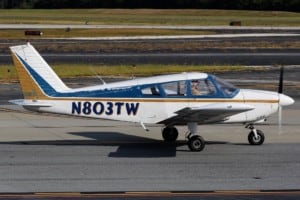 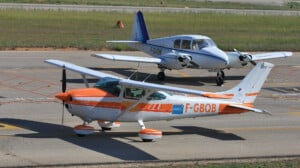 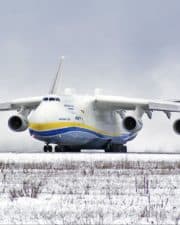