Have you ever heard the terms “flying at the edge of the envelope” or “pushing the envelope”? Ever wonder what envelope they refer to? The flight envelope is a graphic representation of the conditions where you can safely fly an aircraft. When a pilot “pushes the envelope,” they are at the limits of what the aircraft can do.

Every corner of the envelope has a name. The most dramatic sounding is coffin corner—the edge of the flight envelope experienced by high speed, high altitude jets. It occurs where the stall speed (Vs, which increases with altitude) meets the Maximum Mach Number (Mmo, which decreases with altitude). The result is that, in some situations, there is only a few knots difference between stalling and an overspeed.

What is the Meaning of Coffin Corner?

Coffin corner is a scary-sounding place, and for the pilot caught unaware, it is a scary place. Accidents have been accounted to loss of control in the vicinity of coffin corner. You don’t get a name like ‘coffin corner’ without earning it.

Interestingly, some say that flying in coffin corner doesn’t get its name from the idea of death or a dangerous place to be. The name comes from the graphical chart of airspeed limitations. The resulting corner looks like the top of a coffin if you plot the variable out.

Other names for coffin corner include Q corner, where Q stands for dynamic pressure changes. It’s also sometimes called the Maximum Aerodynamic Ceiling because above this point the aircraft cannot be operated—not due to thrust or other limitations, but due to the aerodynamics of the wings.

As with any aircraft operations at the edge of the flight envelope, coffin corner is a region of flying bounded by bad stuff. If you go too slow, the plane stalls. If you go too fast, high-speed shockwaves build up on the wings that could make the plane uncontrollable. So the moral of the story is don’t go too fast or too slow!

Most aircraft are designed with a comfortable margin of safety and no reason for pilots to really “push the envelope.” However, one famous plane was designed to push the edge every day, and that with the famous U-2 spy plane. The U-2 was designed to fly at altitudes of 75,000 feet and subsonic speeds. That combination made the plane very challenging to fly.

Another example that demonstrates the dangers of coffin corner was the crash of Air France Flight 447. AF447 experienced multiple instrument failures over the South Atlantic enroute from Rio de Janeiro to Paris in 2009. Many theories have been floated for exactly why the plane crashed. Still, the general consensus is that the pilots became disoriented—believing they were flying too fast (over Mmo) and tried to recover from a basic stall when, in fact, the plane was going too slow.

Stall Speed vs at Altitude

As all student pilots know, an airplane cannot fly too slowly. As airspeed decreases, the wing’s angle of attack must increase to produce enough lift to stay aloft.

But the pilot cannot keep adding more angle of attack by pitching up indefinitely. There is a critical angle of attack, and beyond that angle, air will not flow over the wing. Once that happens, the amount of lift the wing is making decreases suddenly, and the wing is stalled.

The speed at which a pilot gets to the critical angle of attack actually changes. It’s not a fixed number that always remains the same, even though most pilots memorize the Vs or Vs1 for their aircraft. Those published speeds are calculated under specific conditions—sea level on a standard day, etc.

Light airplane pilots seldom worry about how the stall speed increases as the altitude increases. But as the air in the atmosphere becomes thinner, the wing requires a greater angle of attack to make the same amount of lift. In other words, as you climb higher, the airspeed at which a stall will occur also gets higher.

What is Mmo in Aviation?

High-speed aircraft operate in terms of Mach numbers. This isn’t just for supersonic aircraft—any plane operating near the speed of sound must think about supersonic aerodynamics and how it will affect them.

For example, a typical airliner may be operating at 35,000 feet and 0.8 Mach. They aren’t flying supersonic, but remember that the air traveling over their wings is accelerated. So, even though the plane’s speed is around 0.8 Mach, the air over the wing may be much closer to the speed of sound.

As the air speeds up over the wing, a shockwave will form when it hits Mach 1.0. That shockwave breaks up smooth airflow over the wing and results in a shaking known as Mach buffet.

In severe cases, the buffet can result in a phenomenon known as Mach tuck. In this case, the center of pressure over the wing moves around due to the shockwave. As it moves aft, the nose pitches down. The supersonic airflow over the wing may also make a conventional elevator less effective, meaning it can be hard to recover and get the nose up again to slow down.

For subsonic aircraft, prevention of the shockwave over the wing is critical. This is why designs are limited by a maximum flight speed—Mmo, or the maximum Mach number that you can fly a plane.

One final note about Mach numbers—as the atmosphere gets less and less dense at altitude, the speed of sound decreases. So when converted into true airspeeds, the Mmo decreases with altitude.

This makes coffin corner tricky—the stall speed is high because of the thin air, but the Mmo is relatively low because of it. So the pilot is forced to thread the needle between going fast enough not to stall but slow enough to prevent the Mach shockwave from forming on top of the wings.

Preventing tragedy and recovering from a problem in coffin corner is all about quick and accurate airspeed control. The numbers are usually too close to allow for hand flying. You want the high gauge of accuracy you can get, and this generally means flying with the aid of a good autopilot.

One way to get out of a problem is to descend. Theoretically, if the aircraft is brought to a lower altitude, the stall speed will get lower, and the Mmo will get high, thus giving the pilot more room to recover. 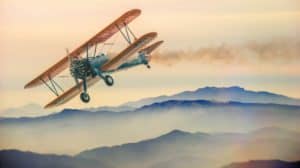