The Robinson R44 helicopter is a four seat, single engine aircraft that has been in production since 1977. It features an advanced airframe and rotor system with a high degree of redundancy to achieve rugged reliability. The engine controls are designed for mechanical simplicity, ease of maintenance and low cost of ownership. The pilot and the passengers enjoy excellent visibility from the oversized windows, which also help give it its nickname “the bubble.” 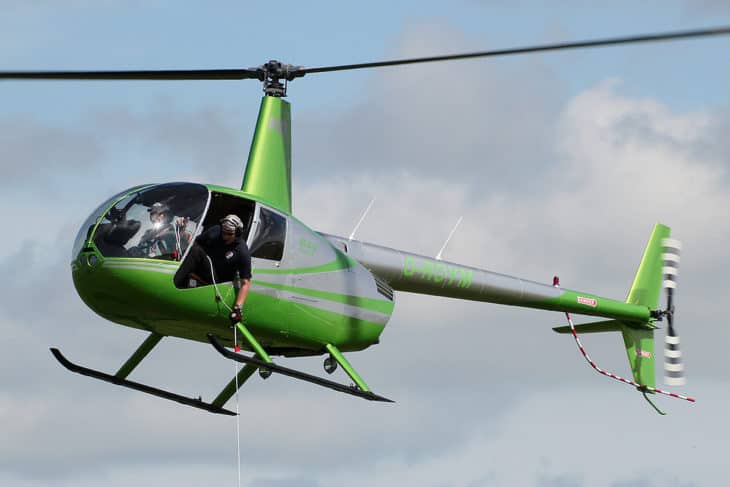 The Raven is constructed from advanced composite materials. The exterior is covered with a high-strength carbon fibre reinforced polymer while the main rotor blades are made from an aluminium/magnesium alloy.

The tail boom is made from chrome molybdenum steel fitted to a high-strength aluminium alloy tail rotor gear box. The cockpit, engine compartment, fuel tanks and landing gear are all constructed from shatterproof polycarbonate plastic to increase visibility in bad weather conditions or low light levels.

The Raven has a main transmission with an automatic slack adjuster (ASA) which allows the pilot to change the pitch of the blades by an amount of 2″ on the ground without running through the normal procedure. The ASA also has a ‘cold mode’ to prevent damage if icy conditions are encountered during flight.

The helicopter is powered by a Textron Lycoming LTS 101-750B turboshaft engine, capable of 746shp on take off. The rotor blades are driven by hydraulic motors and have a maximum speed of 250 rpm. The throttle control is automatic with pedal input for manual control in the event of engine failure.

The R44 Clipper is fitted with floats, skis, or conventional landing gear. It was designed to be used in commuter and air taxi roles. The helicopter is capable of carrying 2-3 passengers in addition to the pilot.

The floats have two float pontoons each with three individual water rudders to provide lateral stability on water landings as well as directional control by varying the throttle and pitch.

A hand pump is available to allow the pilot to deflate or inflate the floats at any time. The elevator trim must be neutral when on floats, with no nose up pitch.

The R44 Clipper can be fitted with a removable ski landing gear which allows for operations in very cold climates below 0 °C. The skis have a retractable hook underneath the helicopter which can be used to provide limited ground taxiing in low snow conditions or on hard surfaces.

The tail of the helicopter has an anti-skid plate installed which allows the helicopter to slide without becoming trapped in snow and ice. When all three blades are fitted, minor glide approaches are possible.