Robinson Helicopter is one of best known helicopter manufacturers, despite only producing three models.

Founded in 1973 by Frank Robinson, Robinson Helicopter has since produced more than 12,000 aircraft. Frank Robinson was a former employee of both Hughes Helicopters and Bell Helicopter. The R22 was introduced in 1979, and thanks to its low cost and easy maintenance, it quickly became a favorite at flight schools and with private owners.

The R44 was then released in 1992, featuring a more powerful engine, but the same great design philosophy as the R22. Ten years later they introduced the R44 Raven II, which had an advanced engine, as well as an improved 28-volt electrical system. This engine was designed in conjunction with Robinson and allowed the helicopter to perform better in hot temperatures and at high altitudes.

By 2003, the R44 sales had easily doubled the R22 sales. Now that Robinson Helicopter had a great engine in place to use, they were able to develop their five-place turbine helicopter. This R66 Turbine was finally certified in 2010 to the updated federal regulation amendments. 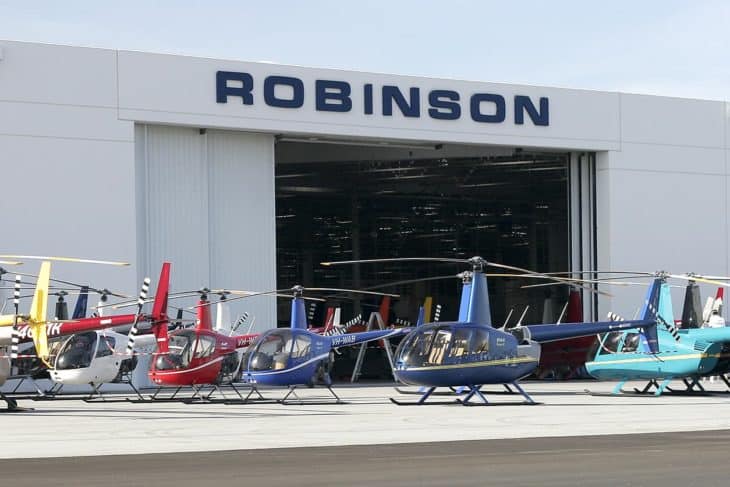 The top sellers of Robinson Helicopter are the R44 and R66 models. They are currently both offered with many different configuration options, including police, float, and even news versions.

Recently, Robinson Helicopter released the R44 Cadet, this is a two-place R44 that has been specifically designed for training.

Robinson Helicopter is known for their commitment to R&D. They continue to offer new technology and to make improvements on their past helicopters. They have recently released an autopilot for helicopters, as well as glass avionics.

There was a two-year investigation performed by 60 Minutes (Australia) where they uncovered that 78 people died in the past decade due to crashes from these helicopters. Ladd Sanger, the Slack Davis Sanger aviation attorney was interviewed during this investigation.

As a result of the investigation, the Civil Aviation Safety Authority grounded all R44 helicopters that didn’t have improved and upgraded fuel tanks as of the first of May 2013.

The main problem with these fuel tanks is that in July of 2006, Robinson Helicopter Company released Safety Notice 40, which encouraged pilots and occupants to wear fireproof helmets, gloves, and suits. It wasn’t until February of 2012 that they released Service Bulletin SB78, requiring the installation of improved fuel tanks for safety.

Another problem that Robinson Helicopter was involved in dealt with mast bumping. This is when load on the rotor assembly is reduced during flight, resulting in flapping of the rotor blades. The end result is that the entire rotor assembly can easily shear off of the helicopter.

Since the turn of the century, 165 people have been killed in the United States when they were involved in crashes with Robinson helicopters. Worldwide, there have been 512 deaths since 1982 with a total of 291 Robinson crashes.

R44 helicopters that were manufactured before December of 2010, as well as all R22 helicopters, have fuel tanks that are more susceptible to rupturing than other fuel tanks. This means that the fuel system was likely at fault for the majority of these crashes.

Where Is Robinson Helicopter Company Based?

The company is based in Torrance, California at Zamperini Field. There are more than 400 dealers and service centers that are located throughout the world. All of the service centers and dealers are independently owned and operated. This means that they are not agents of Robinson Helicopter Company.

Where Are Robinson Helicopters Made?

These helicopters are all manufactured, assembled, inspected, and tested at the Torrance, California factory. In an effort to improve product quality, they manufacture many of their parts in house and also have a very skilled workforce.

In addition to producing new helicopters, Robinson Helicopter also has a program to overhaul older aircraft.

What Else Does Robinson Helicopter Company Manufacture?

Currently, the company only manufactures three different models of helicopters. They manufacture the R22, which is a two-seater, the R44, which is a four-seater, and the R66, which is a five-seater. The R22 and the R44 both use Lycoming piston engines, while the R66 uses a turbine engine.

How Many Employees Does Robinson Helicopter Have?

Who Is the CEO of Robinson Helicopter?

Kurt Robinson is the current President and Chairman.

How Much Is Robinson Helicopter Worth?

This company has posted a revenue of $200 million.