The Mitsubishi MU-2 was manufactured by Mitsubishi Heavy Industries as a high-wing turboprop aircraft designed with a pressurized cabin and powered by twin engines. It first flew in September 1963 and was produced from 1963 to 1986. A total of 704 aircraft were built in Japan and Texas, United States. The MU-2 is among the most successful Japanese aircraft after the Second World War. 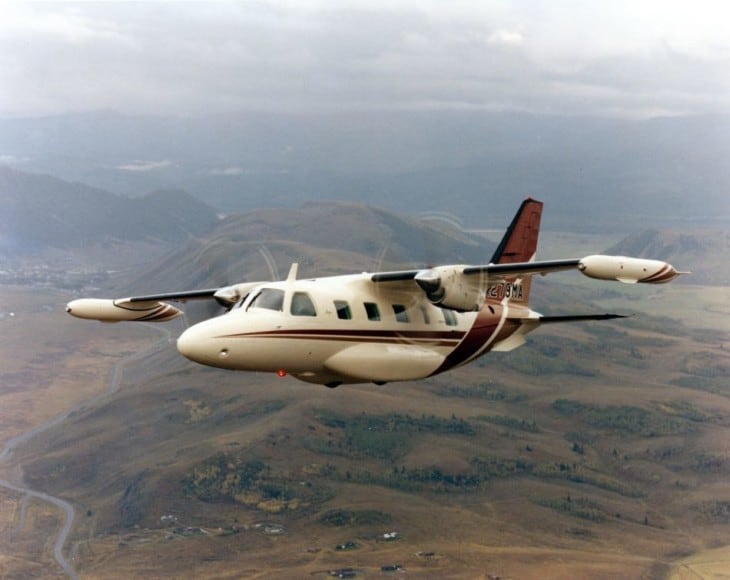 In 1956, development on the Mitsubishi MU-2 started. It was the company’s first aircraft design after the Second World War. On September 14, 1963, the MU-2 took to the air for the first time. It was built as a light transport aircraft powered by twin turboprop engines intended for various civil and military uses. The aircraft was produced until 1986 with a total of 704 built.

The MU-2L version can accommodate one or two pilots and four to twelve passengers on board. It has an external length of 12.01 meters, an external height of 2 meters, and a fuselage diameter of 1.6 meters. It has a tail height of 4.17 meters and a wheelbase of 4.4 meters. The wingspan is 11.94 meters including tip tanks and the wing area is 16.55 square meters. It has an empty weight of 3,433 kg, a maximum payload of 1,726 kg, and a maximum usable fuel capacity of 367 US gal. The maximum takeoff and landing weights are 5,250 kg and 5,000 kg, respectively.

The aircraft is powered by two AiResearch TPE331-6-251M engines. It is a single-shaft turboprop with an integral gearbox, two-stage centrifugal compressor, reverse annular combustors and three-stage axial turbine. Each engine produces a maximum thrust of 776 hp and drives a three-bladed Hartzell HC-B3TN-5/T10178HB-11 fully-feathering reversible constant-speed propellers of 2.29 meters in diameter.