The Gulfstream III is a large private jet produced from 1979 to 1986. It was designed by Gulfstream Aerospace with a maximum range of 3,650 nautical miles and a maximum speed of 501 knots. 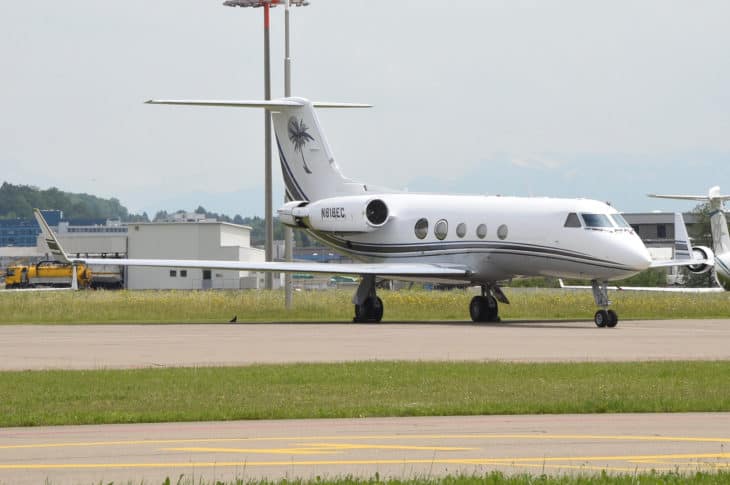 On December 2 1979, the aircraft took its maiden flight.

On September 22 1980, the Gulfstream III received its type certification from the Federal Aviation Administration and was introduced to the market.

The Gulfstream III has an external length of 25.3 meters, height of 7.4 meters and a fuselage diameter of 2 meters. Its wing has a span of 23.7 meters, wing area of 86.83 square meters, and 1.5 meter winglets. The leading edge is extended and has a modified wing contour. The radome is lengthened and a new curved windshield is attached.

The Gulfstream III’s design aims to incorporate a new wing employing the National Aeronautics and Space Administration supercritical airfoils for delaying the beginning of wave drag in the transonic speed range.

Development studies concerning drag, weight, fuel capacity, performance and cost showed that a considerable part of the new wing benefit can be secured with alterations to the current wing. As an outcome, the new wing idea was aborted and the work started on design customization that kept the Gulfstream II trailing edge surfaces and wing box structure.

The maximum take off and landing distance are 1,550 meters and 1,346 meters respectively.

The Gulfstream III has been used as a civilian and military aircraft. For civilian type, the Model G-1159A is a corporate version with two or three crew executive, driven by two Spey turbofan engines by Rolls-Royce.

For the military versions, there were several types listed. The C-20A is a United States Air Force aircraft designed for 14 passengers and 5 crew. The C-20B is a US Air Force and US Coast Guard aircraft with enhanced electronics that was in service for Operational Support Airlift (OSA) and for Special Assignment Airlift Missions (SAAM).

The C-20C is a US Air Force variant based from C-20B with improved and strengthened secure communications mostly used as a backup partnering the VC-25A during its operation as Air Force One.

The C-20D is a US Navy OSA aircraft with customized communications equipment usually in service of high-ranking officials. The C-20E is a US Army variant with an extended fuselage and a modified wing. The Gulfstream III SRA-1 is a special reconnaissance and surveillance type for export while the SMA-3 is an export variant for Denmark.

On August 3 1996, a Royal Danish Air Force Gulfstream III F-330 crashed while on final approach to Vagar Airport, Faroe Islands. 9 people died on this accident along with Jorgen Garden, the Danish Chief of Defence.

On March 29 2001, a Gulfstream III operated by Avjet crashed into the ground while attempting to land at Aspen-Pitkin Country Airport. 15 passengers and 3 crew members died on this accident.

On July 4 2017, a Gulfstream III YV-2896 was shattered into the sea of Pampatar. Among the nine crew on board, only 2 bodies were recovered.