Extending the limits of what can be attained, the Falcon 8X is an ultra long range aircraft that has the longest cabin in the Falcon family. Manufactured by Dassault Aviation, it maintains the heritage of Falcon as having high efficiency, outstanding performance, flexibility and comfort. 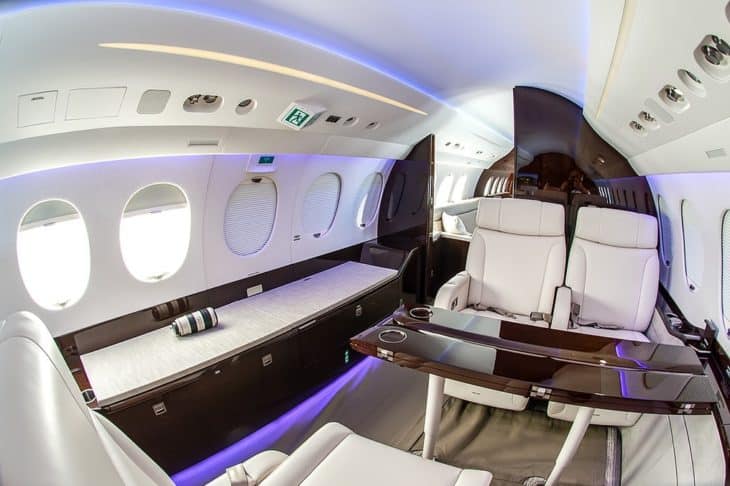 In May 2014, Serge Dassault, the chairman and chief executive officer of Dassault Group placed the first order of the Falcon 8X.

On February 6 2015, the prototype version registered as F-WWQA flew from Bordeaux-Merignac Airport in France. Also on the same month, the aircraft took its maiden flight.

On October 5 2016, the first Falcon 8X was delivered to Amjet Executive, a European air charter company.

The wing has a span of 26.29 meters with a wing area of 70.7 square meters. The structure of the wing is 270 kg lighter and alteration on its structural design are focused at lowering the overall aircraft drag as the aircraft cruise.

The airframe and wing of the Falcon 8X are acquired from the Falcon 7X.

The Falcon 8X cockpit features an advanced EASy flight deck avionics system that is highly intuitive and interactive. It includes four 14.1 inches screens arranged in a T- configuration that can display all data clearly from aircraft sensors affecting systems, communications, navigation and flight management. The system is also equipped with two Cursor Control Devices (CCD) that are used by the pilot for response input to the Display Unit (DU), and two Multifunctional keyboards (MKB).

The aircraft boasts its long and spacious cabin with a length of 13 meters excluding cockpit and baggage, a height of 1.89 and width of 2.34 meters. It has a 48 cubic meter cabin volume.

The cabin can be configured into thirty different layouts depending on the requirements that makes it the most flexible cabin in the industry. The cabin also brags its low noise level and high air quality that keeps the passenger comfortable even while cruising at 41,000 feet.

The Falcon 8X features the FalconCabin HD + cabin management system that enables the passenger to control the cabin environment anywhere by using an Apple device. This new feature was developed by Rockwell Collins, including a wireless cabin media server and an iPad moving map application.

The Airshow iPad app lets the passenger track their flight progress and call up a virtual moving map of any area by simply pointing the iPad in any desired direction.

The Falcon 8X is driven by three Pratt & Whitney Canada PW307D turbofan engines. Each engine has a 6,721 lbf thrust rating.