From the Hound of the Baskervilles to Heathrow Airport, London is famous for its fog. That said, there’s no need to call on Sherlock homes to crack the case of why fog matters to pilots and airports the world over.

Fog lowers visibility, which can make it harder to see where you’re going. That much everyone knows. What you may not know, however, unless you’re a pilot, meteorologist, or citizen of an oft-foggy city like London, is just how many “types” of fog there are. For most of us, fog is simply a murky white-grey-ish cloud that hangs over an area and makes it hard to see. However, there’s a lot more to it than that.

For one thing, location can play a big part in how fog works and where it’s seen. Thumb through British literature, and you’ll see fog pop up everywhere from Charles Dickens’ London to the Yorkshire Country of the Brontë Sisters to D.H. Lawrence’s mining towns in Northern England.

But while the fog in Oliver Twist, Jane Eyre, and Sons and Lovers may all “read” the same, flying through foggy conditions in the areas in which they’re set would be very different experiences. The same holds true anywhere there is fog. Different causes produce different types of fogs.

With that in mind, let’s look at some different types of fog and where and how they occur.

The idea of a cold, foggy night is a popular one in books, and it’s those kinds of weather conditions which can contribute to radiation fog. It occurs most commonly in winter, when the land starts to cool overnight and moisture lingers in the air close to the ground.

One exception to this rule is areas located at a high elevation above sea level. Here, sunrise does not impact the temperature as immediately, meaning that it can remain colder longer and thus allow radiation fog to persist.

Radiation fog tends to cling relatively close to the ground, rarely extending more than 20 feet from the surface. Warm temperatures are needed to dissipate this type of fog. The colder the temperature and the thicker the fog, the longer it will take to dissipate.

While radiation fog can sit for longer periods of time in mountainous areas, advection fog is more particular to the coastal areas of Northern Europe, especially the British Isles. This type of fog is prevalent in the spring and occurs when moist warm air moves inland from offshore.

In addition, this type of fog requires some wind velocity to form. The more wind there is, the thicker and denser the fog can become. In addition, stronger winds can also lift moisture from overhanging stratus clouds, adding to the fog.

This type of fog can linger over large bodies of water for weeks at a time, moving inland during the day, back out to sea at night, and then encroaching on the shoreline once more the next morning. Heat does not tend to disperse this type of fog easily.

Chances are you don’t think of valleys as places which get too much fog. We tend to imagine fog as being something which encroaches on the type of shorelines and misty mountainous areas which we’ve described thus far.

However, valley fog is a very real phenomenon, and can occur when cold air begins to settle and condense in lower parts of a valley. This is often due to temperature inversion, which can occur when warm air passes above valleys.

While other types of fog can blow in or recede over an area due to weather systems and other factors, valley fog tends to be more confined by the valley in which it is occurring. In winter, it can take several days before this type of fog is dispersed.

As the name implies, this is a type of fog which is typically formed up the slope of a large hill or mountain. As air rises near these slopes, it starts to cool, which in turn allows moisture to condense, thereby helping to form this type of fog.

This is another type of fog which requires wind to form. While we like to think of the higher climes of mountains as a misty area, this type of fog actually occurs a fair distance from the top, covering a broad area between the peak and the base.

A perfect example of upslope fog in action is the Rocky Mountains in Colorado. When winter rolls around, the cold air starts to drift westward and becomes trapped against the eastward slopes of the mountains, and upslope fog is formed.

This is another type of fog that involves cold air passing over warm areas or moist patches of land. Either setting is capable of giving rise to evaporation fog. In addition, these conditions can also give rise to freezing fog, which is described below, and frost.

When warm water begins to evaporate into the lower layers of air, it causes warming, thereby enabling it to rise and mix with cooler air fronts hovering over the surface. The interaction between these different types of air and moisture allows condensation to occur.

This type of fog is most prevalent in autumn. As such, pilots who are flying to areas which are affected by this type of fog need to be aware of it and plan accordingly so as to ensure they can maintain visibility.

One thing to keep in mind when considering different types of fog is that, given the overlapping topography and conditions which produces foggy conditions, some types of fog overlap. Steam fog is such a type, being a specific variation of evaporation fog.

This type of fog is quite prevalent on Scandinavian and Icelandic fjords and coasts, making it something pilots have to plan for when flying to those regions. Given its prevalence here, steam fog is also referred to as Arctic Sea Smoke as well as Frost Smoke.

Steam fog can occur when air which is very cold (think 0 degrees Celsius and below) mingles with warm water. The water vapor which evaporates off the surface cools rapidly below its natural dew point, mixes with the cold air, and forms fog. This type of fog is often very shallow.

As with steam fog, frontal fog is another variation of evaporation fog. It can occur in one of two ways, either as part of a front which extends to the surface, or when air becomes saturated from rain, with the latter occurring in cold air before a warm front.

Because it clings to the lower levels and makes it hard to dive down and see, this is one type of fog which can have a severe impact on aviation. It is extremely dangerous to not be able to maintain visual contact with the ground.

If you find yourself in such a situation due to frontal fog or similar conditions, you’ll want to do everything you can to try to correct the situation. Above all, you need to try to maintain situational awareness at all costs and not fly between layers of stratus.

This is another example of how different types of fog can overlap in terms of their description. Hill fog is formed when the first potential cause of frontal fog – air extending to the surface during a weather front – occurs near hills, which can trap the fog.

Many of the same rules for dealing with frontal fog thus apply here. You will want to be careful to maintain visual contact with the ground at all times. If you are unable to do so, you may want to consider not flying or choosing an alternate route.

This is especially true in the case of hill fog, due to the added danger which hills present. Instead of just having to navigate your way through thick fog, you also have to worry about navigating around hills, which makes things all the more treacherous.

As the name implies, ice fog is a phenomenon which occurs in extremely cold conditions. The air needs to be at least -10 degrees Celsius for there to be a serious chance of ice fog occurring. Because of this, it is most common in Antarctica.

This type of fog is formed when, at those freezing temperatures, water droplets freeze into ice crystals and hang in the foggy air. It is typically shallow. Even so, the combination of fog and ice can make things treacherous for pilots.

That’s due in part to the fact that, while pilots may be able to see through the fog itself, and thus think they can land without a problem, visibility can be limited to just a few meters. This can make it difficult to land safely.

Once again, we see overlap between different types of fog. As you might guess, freezing fog, like ice fog, is formed in part when extremely cold temperatures (at least -20 degrees Celsius) cause ice crystals to freeze and mingle with fog.

One thing to keep in mind with this type of fog is that it can have a tangible impact on your aircraft, with the fog leaving a thin layer of frost. This must be removed before you take off via a de-icing treatment, and your aircraft should be checked once more for ice before taking off.

This is because a buildup of ice, moisture, or anything else on your wings or the body of the plane can interfere with the delicate balance necessary to maintain a safe flight. You don’t want this to happen, so be sure to perform those preflight ice checks. 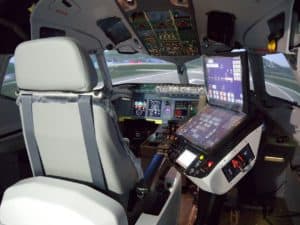 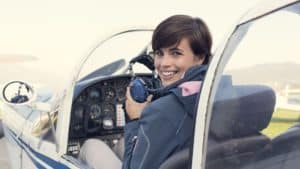 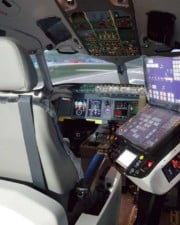 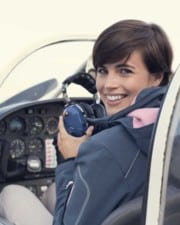