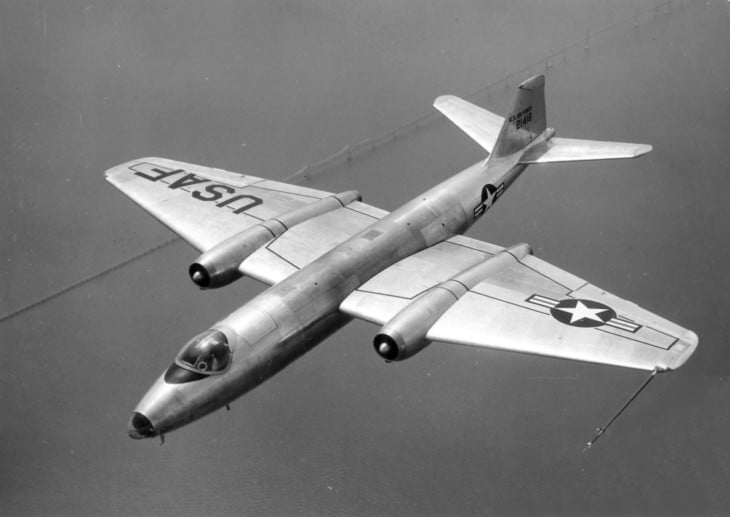 The Martin B-57 Canberra was created for the USAF back in 1953 to function as their tactical bomber and photo-reconnaissance aircraft. The organization behind the production of this aircraft under license from the first producer, English Electric, was Glenn L. Martin.

On June 18, 1954, the more improved variant designated as the B-57B which incorporated several enhancements took to the air for the first time.

The B-57B is a definitive production version of the Martin B-57 with an external length of 20 meters, an external height of 2.8 meters, and a fuselage diameter of 2 meters. It featured a fighter-style canopy and has a tandem cockpit that seats a pilot and a navigator. The aircraft has a tail height of 4.52 meters and a wheelbase of 5 meters. It has a wingspan of 19.5 meters and a wing area of 89 square meters. The B-57B was also designed with hydraulically-actuated speed brakes. The empty weight is 12,285 kg, the gross weight is 18,300 kg, and the maximum takeoff weight is 24,365 kg. It has a maximum payload of 3,300 kg.

The more refined bomber version is powered by twin Wright J65-W-5 turbojets. It was an axial-flow turbojet with a thirteen-stage axial compressor, annular combustors, and two-stage axial turbine. Each engine produces a maximum takeoff thrust of 7,220 lbf. The B-57B has a maximum speed of 520 knots at 2,500 feet. It has a cruise speed of 414 knots and a stall speed of 108 knots. The combat range is 825 nautical miles with 2,380 kg of bombs, and the ferry range is 2,360 nautical miles. It can fly up to 45,100 feet and can climb at a rate of 6,180 feet per minute. The takeoff distance is 60 meters.

The aircraft could be armed with four 20 mm M39 single-barreled revolver cannon with 290 rounds per gun, and 2,000 kg of bombs in the bomb bay including nuclear bombs and 1,300 kg on four external hardpoints located on the outer wing panels including unguided rockets. The B-57B was also fitted with APW-11 Bombing Air Radar Guidance System for a ground-directed bombing, Short-Range Navigation (SHORAN) bombing system, and APS-54 Radar Warning Receiver.

The original versions of the Martin B-57 Canberra were like in the British-made Canberra, but then Martin made numerous modifications to make the aircraft a more American one.

In September 1950, the USAF put out a requirement for a new attack aircraft designed around a serviceable bomb load and speed. Turbojet engines were to be utilized for propulsion to accomplish the desired performance.

Specifications needed a speed of about 630 miles per hour along with a range out to 1,150 miles, as well as a service peaking near forty thousand feet. That would make the aircraft a difficult target for interception by the ground-based fire or energy, offering the design more impunity over the battlefield in a tactical bomber role.

Of the submissions received, the British English Electric Canberra was shockingly picked over the local Martin XB-51 bomber prototype. The Martin B-57 Canberra itself was a record-setting, with two engines, multi-crew bomber whose ordnance-hauling capabilities and performance played well into the standing USAF requirement.

The Martin B-57 Canberra made its very first flight in July 1953, and by the time the production finished in 1959, a total of 403 versions were created. It readily adapted to different roles, including toss bombing for nuclear weapons and testing the strange Low Altitude Bombing System (LABS).

Canberra functioned with distinction along with the USAF for over three decades despite its first WWII technology. Scheduled to be retired in the late 1950s, a set of crises kept the Martin B-57 Canberra in the Air Force inventory, which involved service over the Vietnam War up to 1983.

The Martin B-57 Canberra was enhanced to make the B-57B have a more UDS touch. Thus, the tandem seating was launched for the two crew members: one for the navigator and one for the pilot, together with an all-new canopy.

The first Martin B-57 Canberra was picked as B57A that had the similarity to their British counterparts, as they’re geared with two of the Armstrong Siddeley Sapphire engines that were also created locally in America under the Wright Company license.

However, the B-57B model was run by two of the Wright J65 turbojet engines, each of which designed a thrust of 7220 pounds. That enabled the Martin B-57 Canberra to fly at a very top speed of 598 mph while cruising speed was nearly 475 mph.

Three of Martin B-57 Canberra fly today along with NASA for environmental and weather study for more than sixty years after the plan first flew. The airplane was picked for its all-weather and high-altitude capabilities, capacity to fly night and day, as well as its 2,500-mile range.