The Eurocopter MH-65 Dolphin is a twin-engine search and rescue helicopter built to be in service for the United States Coast Guard (USCG), its primary user since 1984. It is an American version of the French-built Eurocopter AS365 Dauphin and is mainly used as a short-range recovery (SRR) aircraft. 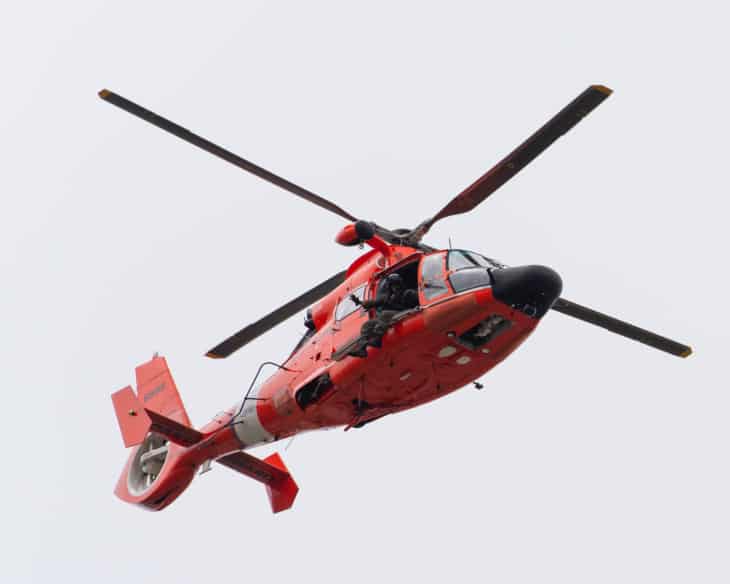 In 1979, the United States Coast Guard preferred the SA366 G1 Dauphin to take over the Sikorsky HH-52A Sea Guard as its new short-range recovery (SRR) air-sea rescue helicopter. Although, compared to the HH-65A, the Dolphin cannot carry out water landings. The Dolphin is a multi-mission helicopter used for homeland security patrols, freight, war on drugs, ice-breaking, military operational readiness, pollution management, and search and rescue operations. The helicopter was manufactured by Aerospatiale Helicopter Corporation now known as Airbus Helicopters and was built in Grand Prairie, Dallas, Texas. It is powered by two Lycoming LTS101-750B-2 turboshaft engines. Avionics were manufactured in Cedar Rapids, Iowa by Rockwell Collins. In March 2004, the Lycoming LTS101-750B-2 was replaced by Turbomeca Arriel 2C2-CG turboshaft engines which produces an 853 horsepower of thrust each. The engine upgrade has developed a secure and more efficient aircraft. It has a maximum speed of 180 knots and a range of 355 nautical miles.

The Dolphin is popular for its Fenestron a protected tail rotor that operates like a ducted fan. It also features a computerized flight management system that incorporates technologically-advanced communications and navigation equipment. It can accomplish an unsupported approach to the water and bring it into a steady 15-meter hover which is an essential safety feature in darkness or inclement weather. The Dolphin is also equipped with automatic fly search patterns, allowing the pilot and copilot to focus on catching sight of and searching the object.

The Dolphin is certified for single-pilot instrument flight rules (IFR) operation, and the HH-65A was the first helicopter to be certified with a four-axis autopilot.